Which win will YOU make possible?

Underlying all the work of the Oakland Institute is our strong commitment to elevate the voices of farmers, pastoralists, fisherfolk, Indigenous Peoples, and communities who are ignored, marginalized, and repressed as they face the theft of their lands, livelihoods and culture.

This year, your support helped elevate struggles from Tanzania and Kenya to Nicaragua and Sri Lanka.

Our June 2021 report, The Looming Threat of Eviction, unveiled plans of the Tanzanian government and UNESCO World Heritage Committee to evict tens of thousands of Indigenous pastoralists from their ancestral land. We smashed the lies used to justify the dispossession of the Maasai — calling on the government and international conservation agencies with our core conviction — top down approach to “conservation” does not protect the environment and that impacted communities must have a say in the decisions that affect their lives.

A petition following the report garnered over 100,000 signatures. Working alongside community members, we remain tenacious in our struggle to ensure the rights of the Maasai are recognized as essential to conserving nature.

With Your Support We've Stood Fast

But Our Work Is Far From Finished

Bringing to Light the Drivers of Violence Against Indigenous in Nicaragua

Following the findings of Nicaragua’s Failed Revolution which garnered international media attention — bringing to light the land rights struggle of the Indigenous and Afro-descendent communities in Nicaragua, our advocacy resulted in a hearing at the Inter-American Commission on Human Rights (IACHR) in March 2021. Alongside partners, the Institute brought attention to the causes, magnitude, and impacts of colonization of Indigenous lands and the drivers of this violence in the presence of the Nicaraguan government.

Elevating Voices of the Forgotten in Sri Lanka

Our report, Endless War: The Destroyed Land, Life, and Identity of the Tamil People in Sri Lanka — released at the 46th session of the UN Human Rights Council — provided shocking new evidence on the extent of land grabbing and the impact of continued militarization on the Tamil population. Our advocacy led to a new UN resolution holding the government accountable for past and ongoing human rights abuses and increased the capacity of the Office of the High Commissioner to monitor violations of international law for future prosecutions.

This work was fueled by some serious people-power. It is also an example of the kind of rigorous research and advocacy policy makers, journalists, impacted communities, and you have come to expect from us. This would not be possible without your support because this cost thousands of dollars and endless hours of research to bring to light.

I’m asking you to help amplify our work by making the most generous tax-deductible donation you can today! Because Oakland Institute never takes corporate money or government funding, we’re depending on you — and so grateful you’re at our side!

With deepest gratitude and appreciation, 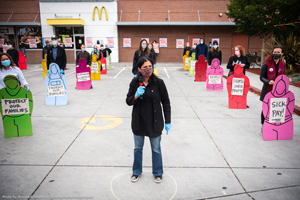