Looming Threat of Eviction for Thousands of Maasai in Tanzania

Oakland, CA —The Looming Threat of Eviction: The Continued Displacement of the Maasai Under the Guise of Conservation in Ngorongoro Conservation Area, a new report from the Oakland Institute, reveals the Tanzanian government’s plans to evict over 80,000 residents — mostly Indigenous Maasai from their land, further restrict the livelihoods of those remaining, and destroy buildings in Ngorongoro Conservation Area (NCA). Announced in April 2021, evictions of local residents are scheduled to unfold on an unprecedented scale under the Tanzanian government’s multiple land use management (MLUM) and resettlement plan.

“For centuries, the Maasai have been the stewards of the land in East Africa’s Great Rift Valley and their lifestyle, livelihoods, and culture are dependent on the thriving surrounding ecosystems. This kind of long-term care and conservation should be rewarded and lauded. Instead, the Maasai are fighting for their lives — facing violence, eviction, starvation, and disease,” said Anuradha Mittal, Executive Director of the Oakland Institute, and author of the Institute’s 2018 report, Losing the Serengeti.

The Looming Threat of Eviction exposes the details and unveils the implications of the plan — developed to address the concerns of international conservation agencies and generate tourism revenue for the country. In March 2019, a joint monitoring mission from the UNESCO World Heritage Centre (WHC), the International Union for the Conservation of Nature (IUCN), and the International Council on Monuments and Sites (ICOMOS) called for action to urgently control population growth in the NCA. The Tanzanian government responded by producing a MLUM and resettlement plan that if enacted, will expand the size of the NCA from 8,100 km2 to 12,083 km2 by including areas from Loliondo Game Controlled Area (GCA), already contested in the East African Court of Justice, and Lake Natron GCA. The plan divides the NCA into four zones, creating new restricted areas where the Maasai are denied access for housing, livestock grazing, and crop cultivation, in addition to recommending the abandonment of nine settlements — despite opposition from Indigenous residents.

Out of the 82,000 mostly Maasai pastoralists to be relocated, the resettlement plan states that 40,000 “immigrants” will be identified and moved back to their “place of origin” by the end of 2021. The identification of “migrant households” has already started in several villages, but residents who have lived in the NCA for generations, are reportedly on the list.

“Given the absence of documentation, it is impossible for many Indigenous to prove they are descended from original inhabitants of the NCA. Indigenous inhabitants will be relocated under the pretense of this plan,” noted Mittal.

Additionally, the plan estimates that over 40,000 “destitute and very poor pastoralists” will be “interested” to move out voluntarily to specified areas. But the resettlement plan overlooks how current restrictions around land use and grazing have resulted in limited access to pasture and subsequent destitution, leaving residents with little choice but to “volunteer,” while details on relocation remain scarce.

The Looming Threat of Eviction dismantles myths, including that of “rising population” used to justify the removal of the Maasai from their land and reveals how this plan was created without consideration of needs of Indigenous residents and proper consultation. The evictions and restrictions constraining tens of thousands of livelihoods are not about ensuring conservation but about expanding tourism revenues within the World Heritage Site. Tourism within the NCA has exploded in recent years with the number of annual tourists increasing from 20,000 in 1979 to 644,155 in 2018 making it one of the most intensively visited conservation areas in Africa. The MLUM plan explicitly mentions the financial stakes conceding that: “maintaining the status quo or leaving the NCA to Indigenous pastoralists the government would lose 50 percent of expected revenue by 2038.”

“The burden of proof is on the government and conservation agencies to concretely show how population growth among the Indigenous is leading to environmental deterioration. It has categorically failed to demonstrate that further restricting grazing and removing Indigenous pastoralists will positively impact the NCA ecosystem. Instead of prioritizing the views of international conservation agencies, it is imperative that the government properly engage the Maasai and grant them authority in the design of future plans for the NCA,” Mittal concluded.

In light of this impending calamity, the Oakland Institute echoes calls made by local communities to stop further displacement and evictions and to immediately create an independent and participatory commission to recommend the best way forward to improve local livelihoods while ensuring the continued sustainability of the NCA’s ecology and wildlife.

Documentation: The Looming Threat of Eviction 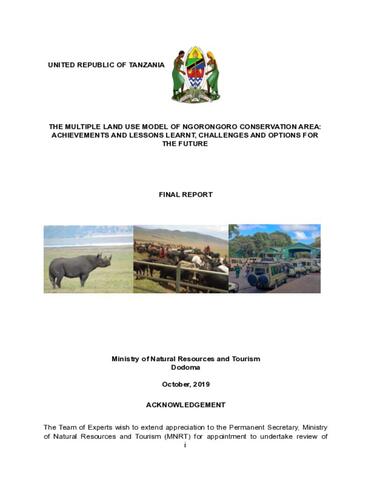