"I am very upset because it is all permenent destruction in my land areas.. Its painful and hard. The land deal is a fraud and signed without our consent. We lost all the virgin forest... Whatever you can do to help would be greatly appreciated..."

Today I share with you a text not unlike other messages, calls, and emails we receive far too often.

Sent from a small village in Papua New Guinea, the essence of this simple message is what drives us and why we continue each day with renewed purpose and determination.

In Papua New Guinea, villagers who depend on their ancestral land and natural resources for survival are being coerced and swindled out of their land so that foreign corporations can fell old-growth rainforest and develop industrial plantations of palm oil for export. The heart-wrenching sight of watching the lifeblood of the forest being loaded onto ships is devastating.

The good news is that, thanks to many of you, we were able to send a research team to Papua New Guinea and produce a film, On Our Land, to give voice to the struggles of local people and bring their stories to a larger audience. We also produced a report to give our partners the research and documentation they need to effectively challenge the theft of their resources.

We’re making headway in this battle, but we need your continued support as we launch a new, ambitious and comprehensive campaign: ZERO Land Grabs.

So far we’ve stopped major land grabs, totaling millions of hectares, and making it so that people can live and work on their land.

ZERO Land Grabs will take the best of what we’ve learned fighting land grabs and streamline the process of how we can quickly help in emergency situations where local people are being forcibly moved from their land. We will work to change policies that promote the spread of land grabs, and build on international partnerships, in the press, civil society and rights groups, to make the case for land rights to donor governments, development agencies and financial institutions.

We are taking these next steps as a leader in a growing international movement to stop land grabs because we’ve proven that we have what it takes.

With your support, we’ve halted these massive projects:

AgriSol in Tanzania – a land deal that would have displaced 170,000 people and put 800,000 acres of food-producing lands into the hands of an Iowa-based corporation planning to grow biofuel crops. OI’s exposé reached policy makers, and the media, including U.S. television coverage on Dan Rather Reports.

Nile Trading Co. in South Sudan – a project that involved nearly 1.5 million acres was ground to a halt after OI released a report exposing the deal and contracts that empowered traditional leaders to reach the ear of the new president, who then halted the in-progress land deal.

Herakles Farms in Cameroon – in partnership with Greenpeace International, OI released a report that uncovered falsehoods involved in this land deal and poked holes in this particularly deceptive “green” investment. The tracts of land now up for negotiation have shrunk from 73,000 to 19,843 ha and from 99 years, it is now a 3 year temporary concession!

Indigenous and local communities — from Ethiopia, South Sudan, Argentina, Papua New Guinea, and beyond — are being coerced and forced to move or give up their land to make way for industrial plantations and logging. Government plans, international institutions, and corporate entities conspire in land grabbing with promises of economic and other long-term benefits to communities like roads, health centers, and education.

Most of these promised benefits go unrealized… We’ve seen water pumps set out but not connected to wells… roads that lead to timber sources, but not hospitals or schools.

The layers of deceit involved in the hundreds of land deals we’ve documented are many.

In Ethiopia we were appalled to find out that after on the ground investigations, USAID and its UK counterpart DFID concluded allegations of abuse and forced evictions were “unsubstantiated.”

We got our hands on the recordings of USAID and DFID interviews with villagers, conducted in-depth research, and in two reports showed persuasively how USAID and DFID support repression in Ethiopia. We also made public audio recordings of the interviews and translated transcripts relaying incidents of abuse, giving listeners and readers the opportunity to judge for themselves. An excerpt, from a Mursi man interviewed during the investigation:

Because of our work, a scathing backlash has ensued resulting in demand for renewed investigations. But we need to keep the pressure on.

We need to work for ZERO Land Grabs.

Three years ago, had you asked me what we could accomplish with our investigations of land grabs, I wouldn’t have imagined how far we’d get.

As the founder of an independent think tank, I didn’t expect that we would be regarded as such a threat to corporations and governments. The anger and veiled threats our organization has faced — because we have exposed the underbelly of unbridled land grabs in sub-Saharan Africa, Latin America, and now in Papua New Guinea — has surprised me. 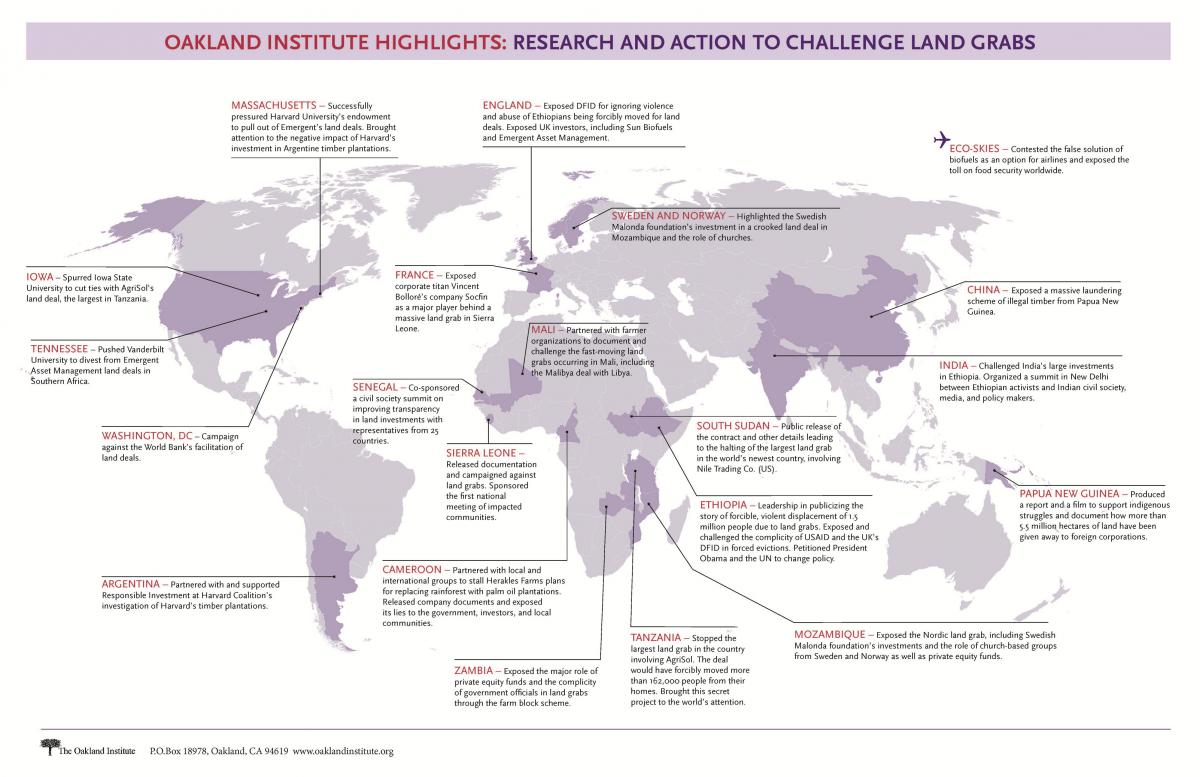 It also confirms a long-held and shared belief in the great power of the pen . . . and in revealing truths.

We aren’t an activist group in the way that some are — protesting and unfurling banners. We have investigated and exposed dangerous and life-threatening trends in large-scale land acquisitions and put documentation into the hands of the public and, more importantly, provided key information to the people directly affected.

We have also taken great pains to publicize our findings; forge relationships with NGOs and journalists in many countries; and testified and petitioned governments, AID agencies, and international groups to take action to stem the tide of land grabs worldwide.

Some people in government and corporations believe we are “aggressive” because of the intense pressure we bring. But I am telling you that the success we are seeing is due to sticking to the high ground and NOT allowing for smaller destruction as a trade-off concession.

The success we share with you is that what we’re doing together is working.

This year was an ambitious one. We made a lot of headway with a large body of work and combined published reports and briefs with effective media outreach to amplify our messages.

We also executed innovative strategies. Earlier this year we organized a summit in India, the largest investor in Ethiopian land. For the first time, activists from Ethiopia had the opportunity to meet their civil society and activist counterparts in New Delhi. From roundtable sessions to strategy discussions, the summit was an important first step in building alliances for concrete actions in the future.

Bringing innovation, creating partnerships and working together: this is how we will win.

Today, I ask you to consider making as large a donation as you can to the Oakland Institute. We need you as a key supporter and ally so that we can keep the pressure on, keep the deals we’ve halted from starting up again, and to get more results in fighting land grabs.

We are truly appreciative of every donation we receive, of any amount. I look forward to 2014, a growing movement in our ZERO Land Grabs efforts, and another strong year!

Thank you for your support.

P.S. I have so many more stories to share with you . . . if you haven’t already joined our email list please add your name at our website: oaklandinstitute.org and write to us for more information at [email protected]

For your donation of $200 or more, we’ll send you a copy of our new film on Papua New Guinea, On Our Land. Thank you so much!