Oakland, CA — As government officials from around the globe descend on Washington D.C. this week for the World Bank’s spring meetings, a new brief by the Oakland Institute urges member states to deliver the final blow to the Bank’s ranking programs — the Doing Business Report (DBR) and Enabling the Business of Agriculture (EBA). The DBR and EBA face a growing crisis of legitimacy and confidence. Since last year, two anchor donors have ceased funding the EBA; in January 2018, former World Bank Chief Economist Paul Romer resigned after exposing politically motivated manipulation of the DBR rankings in Chile, leading the country to demand a full investigation of the rankings. In February, France withdrew from the New Alliance for Food Security and Nutrition (NAFSN), another pro-corporate initiative closely related to the rankings. 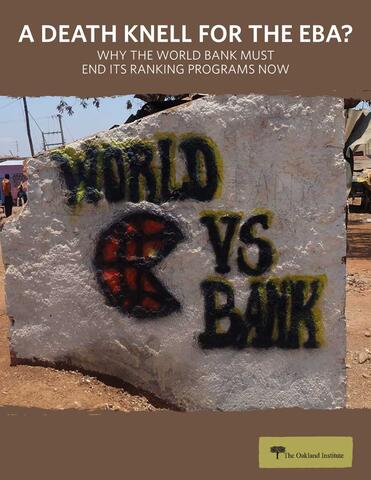 “For years, civil society groups have rejected these programs, which are driving a regulatory race-to-the-bottom that prioritizes corporations over people and farmers,” said Frédéric Mousseau, Policy Director at the Oakland Institute. “It is now time for governments in developing countries to reject being ranked and force the Bank to cancel the programs for good.”

Just three major donors to the EBA remain — the UK’s Department for International Development (DfID), the US development agency USAID, and the Bill and Melinda Gates Foundation. All three are the primary drivers of the same pro-corporate agenda that the Bank’s business rankings push, and have used their power and influence to create in-roads in agriculture to further profits of major agri-chemical corporations.

“We are at a critical moment — confronting multiple crises around hunger, natural resources, and climate change. Rather than addressing these issues and investing in sustainable food systems and agroecology, it is deeply disturbing that the last remaining three donors of the EBA continue to prioritize corporate industrial agriculture - — including partnerships with Monsanto, PepsiCo, Walmart, and more,” continued Mousseau. “We need a major overhaul in how we approach agricultural development and the climate crisis, but the Gates Foundation and two rich countries at the helm get in the way.”

The brief echoes the call that the multi-continental, 280-organization-strong Our Land Our Business campaign has made since its inception in 2014.

“The Bank’s ranking programs are based on flawed logic and cannot be reformed,” said Mousseau. “With donors withdrawing, the time is now for developing countries to reject the rankings and refuse to be scored by rich countries on these failed metrics.”

Read the brief: A Death Knell for the EBA: Why the World Bank Must End its Ranking Programs Now

More information on the Our Land Our Business Campaign

Read more of the Oakland Institute's analysis of the World Bank’s ranking programs: