In the wake of a public campaign urging the IFC to reconsider a $200 million loan to agribusiness giant Louis Dreyfus (LDC), IFC has committed to presenting its full agribusiness portfolio to the World Bank Group Board for review. As the Board grapples with the IFC’s approach to this sector, the undersigned organizations call on you to seize this opportunity to: 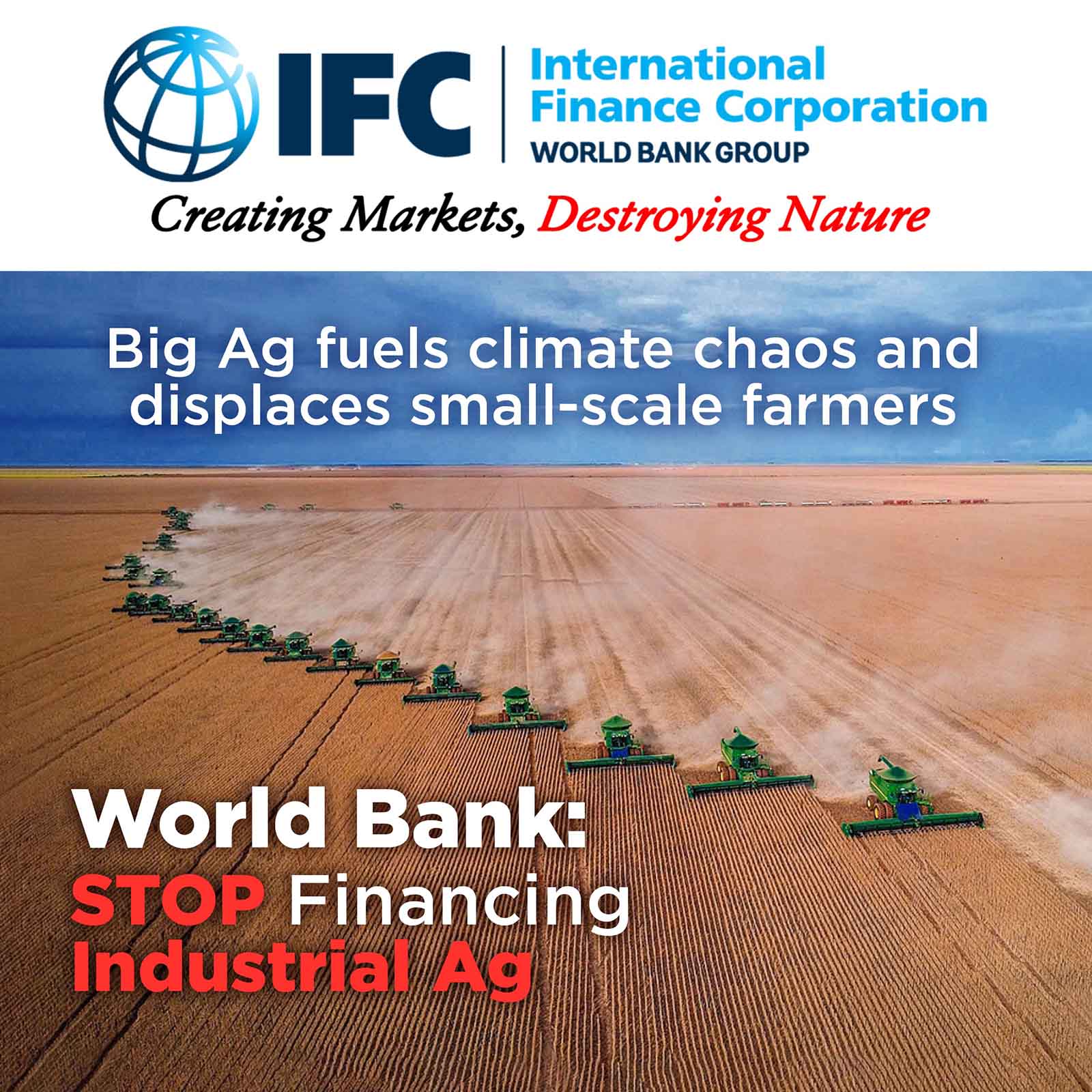 The diverse and potentially irreversible negative environmental impacts of IFC-supported industrial agribusinesses include excessive supply chain GHG emissions, water depletion and pollution, deforestation and biodiversity loss. Negative social impacts include chronic and fatal illnesses associated with industrial crop and livestock producers’ reliance on synthetic herbicides, pesticides, and fertilizers, as well as the pollution of air and water by animal waste from concentrated animal feeding operations (CAFOs) and effluents from slaughterhouses. Land grabbing, violent attacks against Indigenous land defenders and displacement of smallholder farmers have all been documented in the Global South and beyond.

The IFC’s historical support of destructive industrial agribusinesses and the bank’s continued failure to properly account for these operations’ negative impacts during the project categorization and Performance Standard (PS) assessment processes is exacerbating planetary boundary transgression, impeding sustainable development, and threatening to keep at least 15 of the 17 SDGs (including SDG1: No Poverty and SDG2: Zero Hunger) and the Paris Agreement out of reach. The IFC is also contributing to increased concentration in the food sector, which heightens inequality. The following examples highlight the negative impacts of IFC’s industrial agribusiness investments and underscore the risks they pose to local communities and the environment:

The IFC’s $25 million investment in the Salala Rubber Corporation (SRC) is still active and dates back to 2008. Twenty-two Liberian Indigenous communities accuse the SRC of grave human rights and environmental abuses, including the forceful seizure and occupation of Indigenous lands, forced evictions without Free Prior Informed Consent (FPIC), defamation of burial and sacred sites, forced migrations, children’s lack of access to education, underpayment for ecosystem services, and gender-based violence and harassment. The Compliance Advisor Ombudsman (CAO) undertook a compliance investigation in September 2020, noting that the alleged environmental and social impacts are serious, and while IFC’s documentation indicates many of these issues were identified, it is not clear whether they were effectively addressed or resolved by IFC’s pre-investment due diligence and supervision. The compliance process is still ongoing.

Despite opposition by Ecuadorian and global civil society groups, in Spring 2021 the IFC awarded a $50 million loan to support the expansion of Ecuador’s largest meat and poultry producer. Pronaca, Ecuador’s 4th largest corporation, manages over 115 industrial pig and poultry facilities that consume 30% of the country’s corn production. Since 2004, the IFC has provided Pronaca with $170 million in loans. In 2010, Indigenous communities in the province of Santo Domingo de los Tsáchilas filed a formal IFC complaint, stating that animal waste from Pronaca’s intensive livestock farms contaminated local rivers and led to a surge in health problems including skin, respiratory and gastrointestinal issues. Unfortunately, the complaint was closed without a proper investigation and these serious impacts have continued amidst escalating resistance. IFC’s Pronaca investment is indicative of other problematic IFC investments in industrial livestock including: Mavin (Vietnam), Guangxi Yangxiang (China); MHP (Ukraine), HMH Rainbow (Uganda), and Country Bird (Southern Africa), and Santa Priscila (Ecuador), among others.

In July 2022, the IFC approved a $200 million loan to Olam Company, its latest investment in a long stream of funding totaling over $560 million in direct loans since 2013 and over $228 million indirect loans since 2010 to support Olam’s industrial palm oil plantations and mills in Gabon. The latest investment is part of the World Bank Group $5 billion Global Food Security and Nutrition Crisis Program. The IFC investment supports Olam Agri’s purchasing of wheat, maize and soy in sourcing origins for delivery to Olam Agri’s processing operations and other customers in West Africa, South and South-East Asia, and Middle East and North Africa. According to at least one investigation, Olam’s oil palm plantations have led to the destruction of at least 19,000 hectares of rainforest and adverse impacts on the land and rights of local communities.

In 2008 the IFC granted a $62 million loan to Nicaragua Sugar Estates Limited, a company deeply implicated in a severe Nicaraguan health crisis. The Pan American Health Organization claims that the Nicaraguan Chronic Kidney Disease (CKD) death rate - 6 out of 10 sugarcane workers - is the highest in Latin America. In 2008 a local organization of 2,000 former sugarcane workers filed a complaint with the CAO. While the results of the complaint have led to some resource distribution to support affected workers with medical bills, the kidney disease crisis continues due to the harsh working conditions kept afloat by IFC investments. As of April of 2021, the IFC continues to invest in Nicaraguan sugar companies. Monte Rosa, the beneficiary of the current investment, has similar health concerns tied to its operations. In fact, these issues have been studied as early as 2005, finding major labor rights violations.

In 2018, the IFC approved a $7 million investment in a company that intended to buy zebu cattle from Madagascar farmers and export the beef to wealthy Middle Eastern countries.The BoViMA project hit a roadblock when Malagasy President Andry Rajoelina banned the export of zebus last year. Despite being aimed at reducing poverty, the project has invited scrutiny for its negative impacts on food security because it is sourcing human-edible crops for cattle feed in one of the world’s poorest and most water-scarce regions. When fully operational, the slaughterhouse and feedlot would require 120,000 tons of feed and 150 million liters of water a year. This company has been accused of land grabbing in southern Madagascar as recently as December 2021.

For all these reasons, the undersigned organizations are calling for a halt to IFC’s financing of industrial agribusinesses that rely on input-intensive crop monocultures, synthetic fertilizers and pesticides, industrial-scale feedlots and slaughterhouses and the use of prophylactic antibiotics for livestock. All these practices lead to negative outcomes and vulnerabilities, including excessive GHG emissions, deforestation, water depletion and pollution, and ecosystem degradation. Additionally, financing the use of land and other resources to feed animals instead of humans is worsening global food insecurity and malnutrition while driving the overconsumption of animal products, which is increasing rates of diet-related diseases in developed and emerging economies.

The IFC’s investments in industrial agribusiness undermine diversified, agroecological food systems that support food sovereignty. The International Panel of Experts on Sustainable Food Systems describes these as “diversifying farms and farming landscapes, replacing chemical inputs, optimizing biodiversity, and stimulating interactions between different species, as part of holistic strategies to build long-term fertility, healthy agro-ecosystems and secure livelihoods.” As stated in a 2021 letter signed by 280 civil society organizations, IFC and all public development banks (PDBs) are bound to respect, protect and fulfill human rights and are accountable to the public for their actions, including in their financing of private companies.

We urge the Board to show leadership by pressing the IFC to apply much more rigorous screening, classification and assessment methodologies to its due diligence processes and to stop financing industrial agriculture, as the bank’s commitment to aligning its investments with the SDGs and Paris Agreement requires. We are also formally requesting a civil society briefing on the IFC’s industrial agriculture portfolio and relevant outcomes from the Board discussion.

Friends of the Earth US

Global Justice for Animals and the Environment

Focus on the Global South (Thailand)

Friends of the Earth Europe

Friends of the Earth France