Will Carbon Markets Ever Deliver for Southern Governments, Forests and People?

The Paris climate summit in December 2015 will conclude what needs to be a strong agreement to prevent the worst impacts of climate change by limiting global warming to below 2°C or even 1.5°C above pre-industrial levels. Achieving this goal requires action across the board, including eliminating all CO2 emissions from energy production and industrial processes by 2050. Preventing the worst impacts of climate change also requires action around forests meaning existing fossil fuel reserves remain safely locked underground.

So far, the tool that has received most attention to keep forests standing at climate negotiations is a mechanism called Reducing Emissions from Deforestation and forest Degradation (REDD+). The aim of REDD+ is for industrialised countries to pay forested developing countries to slow, halt and reverse rates of deforestation. In 2015, after eight years of negotiations, the development of REDD+ has finally come to a close.

We call on governments gathered in Paris to reject any attempts to expand or establish new carbon markets. To avoid the worst impacts of climate change, governments must ensure that community and indigenous peoples’ rights are respected, that ecosystems are protected, and that food security is ensured.

REDD was based on the hope that the cost of putting it into practice would be covered by revenue from carbon trading.1 The undersigned organisations believe that carbon trading does not reduce emissions, will not deliver money where it is needed on the ground and will not recognize the important role that communities play in protecting forests.

Crucially, the only way to keep forests standing in the long run is to tackle the drivers of deforestation head on: the global commodity trade in unsustainable and frequently illegally produced products must be curbed, while communities’ control over their forests must be secured and their traditional tenure rights restored.

Carbon trading does not reduce emissions

Experience with carbon markets to date shows that carbon trading has failed to deliver real emission reductions, and is likely to have actually increased overall emissions. In the EU Emissions Trading System (ETS), the world’s largest carbon market, this is due to overly generous allocations of emissions permits for companies, meaning they have no obligation to cut their emissions.2 The Clean Development Mechanism (CDM), which allows offsets generated in the Global South to be used to meet the emission reduction commitments of countries in the North, is premised on the idea that offset activities provide an extra emissions saving that is additional to what would have happened in the absence of CDM funding, but this can be an unsound assumption. A review of the impact of the CDM found that non-additional projects could result in as much as 3.6 GtCO2 cumulatively by 2020.3

Carbon trading does not deliver promised levels of finance 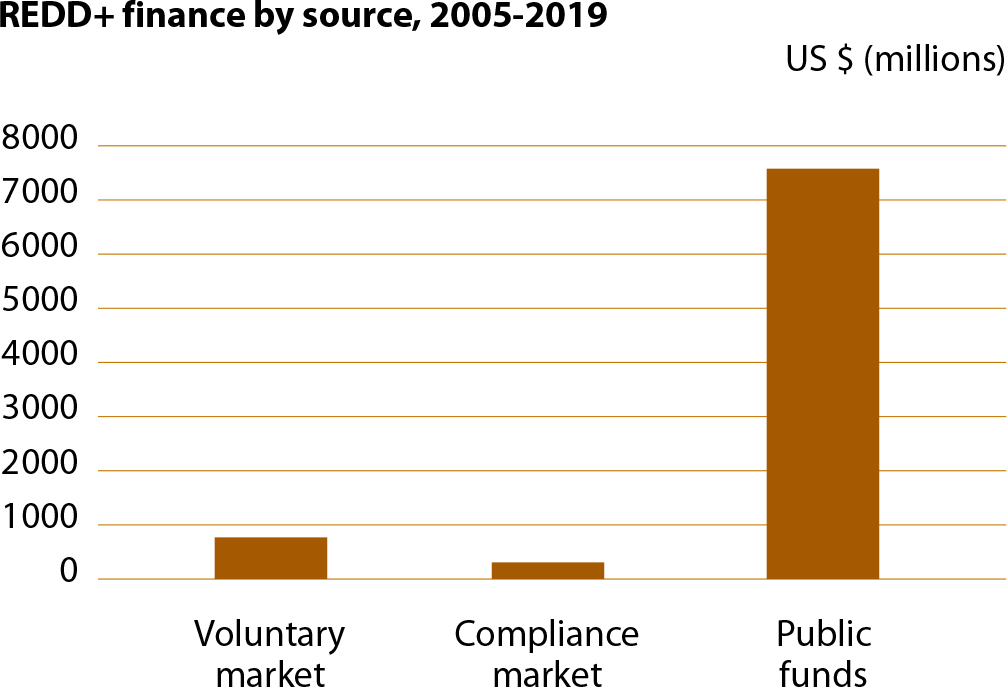 A widely cited figure is that that even halving global deforestation rates would require up to US$30 billion a year in performance based payments from 2020 onwards.4

Public funds derived from Voluntary REDD+ Database, showing total funds pledged by donor countries 2006-2019 at US$7.59 billion (recipient countries report US$4.68 billion for the same time period). Cumulative value of voluntary (US$751 million) and compliance (US$ 310 million) carbon market for forest and land activities 2005-2013, from Forest Trends’ Ecosystem Marketplace: “State of the Forest Carbon Markets 2014”. This figure is for plantation ‘forests’ only. It is also worth noting that no compliance markets accept REDD+ credits — the compliance markets included here are for plantations and forest projects in the Californian, Australian and NZ national trading schemes, which accept only domestic rather than international forest offsets.

So far, this money has not materialized. The vast majority of the money that is available for REDD+ to date has come from public funds from Northern countries. According to the Voluntary REDD+ Database, hosted by the FAO, US$7.6 billion has been pledged for REDD+ in total, although recipient countries report a much lower number on finance received.5

What about future growth in forest carbon markets?

The EU ETS, by far the largest and most mature carbon market, does not accept REDD credits. Other established national emission trading schemes, such as California and New Zealand, currently do not accept international forest offsets.

Besides the exclusion of forest credits from compliance carbon markets, an even greater problem is the collapse of the price of carbon credits. From an early high of €30 on the EU ETS in 2009, in 2011 carbon credits were declared the world’s “worst performing commodity”,6 and in 2012 the Financial Times reported that carbon markets were “close to collapse”.7 The current price of certified emission reductions (CERs) from the UN Clean Development Mechanism (CDM) is € 0.67.

What about the voluntary carbon market?

The voluntary carbon market is small: Ecosystem Marketplace’s “State of the Voluntary Carbon Markets 2015” reports that a total of 87 million carbon offsets were traded in 2014, representing less than 1% (0.25%) of global greenhouse gas emissions in 2014.

Market law dictates that high supply and low demand mean low prices. As demand for carbon credits has fallen over recent years, and supply has risen, the price of the credits have fallen. The average price of voluntary carbon offsets in 2014 reached an all-time low of US$3.8 9

In addition to oversupply and low prices, much of the finance reported in the voluntary carbon market is not in fact driven by the carbon market, but rather from the public sector, and is effectively aid money. In 2013, the German government launched its REDD Early Movers (REM) Programme, which accounts for 10 million of the 87 million global “offsets” traded in 2014 (at US$5 per ton). Since this is public aid money, it is questionable whether these transactions should be counted as ‘market-based’ payments.

Even if there was a forest carbon market, little money would go to activities that protect forests

A global carbon market would work the same as any other commodity market — most of the money would enrich those who trade or speculate in the commodity whilst producers would receive a limited percentage of the final cost, in many key commodity markets as low as 3 per cent.10 Much of the money available for REDD+ has not gone to activities that help to reduce deforestation, but to activities that measure how much carbon is in forests, which does not in itself tackle the drivers of deforestation.11 For example, early REDD+ Readiness Preparation Proposals to the World Bank and UN-REDD designated about 40% on average and up to 80% of readiness costs to designing and setting up a national monitoring systems.12 This emphasis on quantification and verification of carbon in REDD+ arose from the expectation that finance would come primarily from global carbon markets.

What are the alternatives to carbon markets?

The reality is that a carbon market will not deliver the needed finance. A focus on carbon trading has been shown to divert funds away from vital activities of governance and land tenure reform, in order to fund expensive technical activities of measuring forest carbon stocks.13 More effective measures to tackle deforestation include tackling illegal logging and illegal deforestation. In 2012, UNEP and Interpol reported that the value of trade in illegal timber is somewhere between US$30 and US$100 billion.14 Over half of all deforestation is happening illegally, in order to make way for agricultural production.15

Another way to raise finances is subsidy reform. Every two days, fossil fuel companies benefit from subsidies of US$29 billion, according to a new IMF Working Paper.16 Redirecting subsidies could bring direct benefits in terms of reducing fossil fuel emissions, as well as raising additional public finance that could be used to reduce the drivers of deforestation.17

All governments, both North and South, need to be realistic about where money for forest protection will come from and, more importantly, what activities need to be funded in order to tackle to the causes of forest loss. Spending time setting up expensive systems to monitor carbon fluctuations in forests, whilst waiting for forest carbon markets to appear, does not contribute to halting tropical deforestation. Governments — North and South — need to focus on direct investment to make the structural changes necessary to deal with the causes of deforestation and keep forests standing. Where finance is needed, this briefing shows that there are alternatives more likely to provide the funding required to do this than trading forest carbon credits.