Oakland, CA — Threatened and despaired, a group of internally displaced persons (IDPs) in Sri Lanka petitioned the Oakland Institute this year to help them return home. This inspired the Institute’s latest report released today, Waiting to Return Home: Continued Plight of the IDPs in Post-War Sri Lanka. Backed by extensive field research and interviews, the report highlights a harsh reality – amid United Nations resolutions, task forces, and numerous promises made by the Sirisena administration, tens of thousands of IDPs in Sri Lanka still await resettlement, seven years after the end of the civil war. 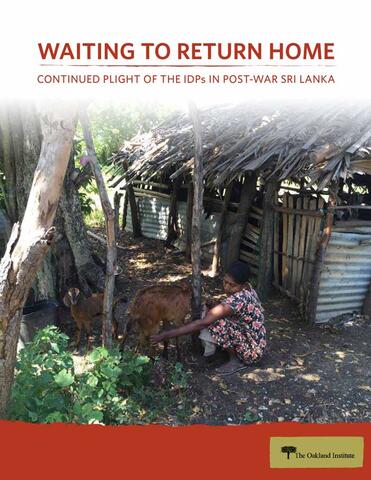 “It was shocking but also humbling to be petitioned directly by communities displaced from their homes and lands,” said Anuradha Mittal, Executive Director of the Oakland Institute. “After exhausting all possible political and legal channels, the IDPs were so desperate after nearly 30 years of displacement that they came to us — an international civil society organization. This is true testimony to just how insufficient the new administration’s actions have been to address these injustices.”

The report examines the various pledges made by President Sirisena to return land. It reveals vast inadequacies including resettlement on lands that are not fertile; have been used as stone quarries; are covered in decades of brush growth; or lack the basic infrastructure for proper resettlement. Several are located beside military camps evoking fear and anxiety in communities, while the Ministry of Defence continues to run luxury resorts and other business ventures on the IDPs’ land.

Waiting to Return Home is released one year after the Oakland Institute’s reports on Sri Lanka, which exposed a continuing silent war in which thousands of Tamils are still subject to military occupation and fierce discrimination by the predominantly Buddhist Sinhalese majority.

This new report comes two weeks before the 32nd session of the United Nations Human Rights Council (HRC), an opportune moment to evaluate how much has actually changed since the Sri Lankan government co-sponsored a resolution in 2015, intended to promote accountability and reconciliation. Despite promises, the report details ongoing issues not just with the release of lands, but also torture, and the government’s wavering commitment to a war crimes court.

Waiting to Return Home also raises questions about the changes in the posture of the international community, including the United States. “One and a half year into President Sirisena’s term, Sri Lanka still desperately needs full resettlement and a true reconciliation process,” continued Mittal. “This is a crucial moment for the fate of the country. The international community — especially the United States, which previously championed justice and reconciliation in Sri Lanka and today the country’s largest export market – must make it clear that returning land to its rightful owners and allowing them to rebuild their lives and livelihoods, is imperative for any long lasting peace and reconciliation in Sri Lanka.”