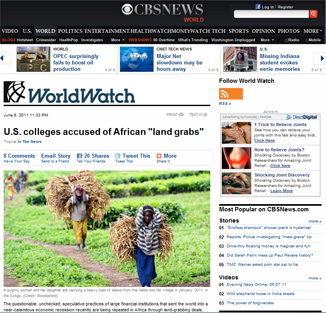 A pygmy woman and her daughter are carrying a heavy load of beans from the fields into her village in January, 2011, in the Congo. (Credit: iStockphoto)

The questionable, unchecked, speculative practices of large financial institutions that sent the world into a near-calamitous economic recession recently are being repeated in Africa through land-grabbing deals, The Oakland Institute, a California-based think tank, said in a recent report.

Hedge funds are partaking in "largely unregulated land purchases" throughout the continent that essentially amount to "the conversion of African small farms and forests into a natural-asset-based, high-return investment strategy" and are often nothing more than "land grabs," the report states.

Additionally, several American universities, including Harvard, Vanderbilt, Spellman, and Iowa universities, are also taking part in or providing funds for the practice that "is resulting in the displacement of small farmers, environmental devastation, water loss and further political instability such as the food riots that preceded the Tunisian and Egyptian revolutions," the reports states.

While the report does not claim the deals break any laws per se, it does strongly insinuate the local population does not reap anything near the promised benefits, whereas the mostly foreign investors in some cases can expect to get up to 25 percent returns.

Much of the money is reportedly funneled through London-based Emergent asset management, which runs one of Africa's largest land acquisition funds,The Guardianreports. A spokesman for Emergent defended the practice to the Guardian, saying: "Yes, university endowment funds and pension funds are long-term investors. We are investing in African agriculture and setting up businesses and employing people. We are doing it in a responsible way ... The amounts are large. They can be hundreds of millions of dollars. This is not landgrabbing. We want to make the land more valuable. Being big makes an impact, economies of scale can be more productive."

Chinese and Middle Eastern outfits have long been accused of similar practices, but the Oakland Institute report claims the European and American funds are behind many of the biggest deals.

Ethiopia, Mali, Sierra Leone, Mozambique, Tanzania and South Sudan are among the countries most affected by the deals, and they often come with incentives for speculators ranging from unlimited water, oil and timber rights to tax waivers.

In 2009 alone, these largely non-transparent purchases gobbled up nearly 60 million hectares - an area the size of France, the report claims.

"No one should believe that these investors are there to feed starving Africans, create jobs or improve food security," said Obang Metho with the Solidarity Movement for New Ethiopia, in the report. "These land grab agreements - many of which could be in place for 99 years - do not mean progress for local people and will not lead to food in their stomachs. These deals lead only to dollars in the pockets of corrupt leaders and foreign investors."