The High Food Price Challenge: A Review of Responses to Combat Hunger 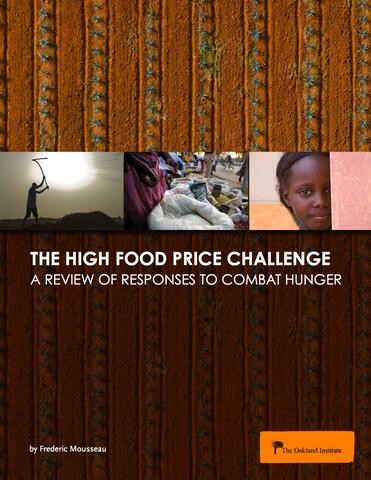 Oakland (CA): A new report released today, The High Food Price Challenge: A Review of Responses to Combat Hunger, by the UK Hunger Alliance and the Oakland Institute, reveals that a major initiative, launched by the Group of 8 (G8), in July 2009 has failed to address the global hunger crisis, which currently affects more than a billion people.

The G8 announced the L’Aquila Food Security Initiative in July 2009 to support food security, nutrition, and sustainable agriculture, with a promise of $20 billion worth of investment over three years. However, one year on from the L’Aquila commitments, it is evident that the international response to the food price crisis has been insufficient and often inappropriate, despite rising levels of hungry people.

“Despite lofty aid commitments at international summits, only a marginal proportion of the G8’s financial pledges to address hunger have actually been disbursed,” said Frederic Mousseau, Senior Fellow at the Oakland Institute and author of the report. “The bulk of the response to the food crisis was borne by remittances from migrants to their home country, which outstripped aid to the developing world by a margin of three to one in 2008,” he continued.

Based on a thorough review of national and international responses to global hunger and featuring case studies from individual countries and regions that confronted the food price crisis using diverse strategies, The High Food Price Challenge shows that, beyond providing aid money, it is imperative that governments and international institutions rethink their policies to mitigate hunger by, above all:

• Boosting food production in a sustainable way focused on investments in favor of small-holders, the rural poor, marginal groups, and women

• Providing more resources to food and agriculture and ensuring donor announcements on responses to the food price crisis are closely monitored.

The High Food Price Challenge: A Review of Responses to Combat Hunger is a joint publication of the UK Hunger Alliance and the Oakland Institute.

The UK Hunger Alliance is a forum concerned with tackling hunger and working towards the achievement of the first Millennium Development Goal. Alliance members who participated in the publication of the report include Action Against Hunger, CARE International, Concern Worldwide UK, Oxfam GB, Save the Children UK and World Vision UK.

The Oakland Institute is an independent policy think tank whose mission is to increase public participation and promote fair debate on critical social, economic, and environmental issues. (www.oaklandinstitute.org).