Oakland, CA — As the count down starts for the climate negotiations to begin in Paris, Sweden has just announced it will freeze payment to Green Resources, one of the largest plantation forestry carbon offset companies operating on the African continent. This move follows the publication of The Darker Shade of Green: Plantation Forestry and Carbon Violence by the Oakland Institute just over a year ago. The findings of the report, echoed by recent Swedish media coverage, exposed how the tree plantation in Kachung, Uganda, has taken away local communities' access to land vital to growing food, graze animals, and to safe drinking water. Several of the local farmers, who opposed the project that took away their land and livelihoods, have been intimidated, arrested and put in jail for up to 3 months.

“The project is financed by private and public investment funds along with international donors, including Sweden, NORFUND, the Norwegian investment fund for developing countries, its Finnish equivalent FINNFUND, and the World Bank's International Finance Corporation. Green Resources claims that the project's goals are to mitigate climate change and bring sustainable development to Africans. 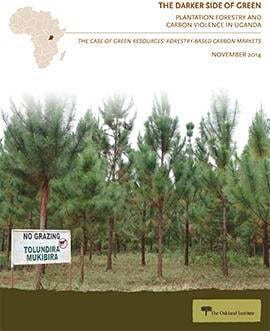 Industrial scale plantation forestry in the Global South is widely championed as capturing carbon dioxide and other green house gas pollution, thereby offsetting pollution in the Global North. “Our report raised important questions and concerns about the ability of the project to achieve its stated goals and highlighted the limits of global carbon markets to address the climate crisis, and the high costs borne by the local people,” said Dr. Kristen Lyons, lead author of the report.

“The claims about corporate environmental and social responsibility simply don't match up with the reality on the ground for many thousands of people directly affected by company activities,” said Anuradha Mittal, Executive Director of the Oakland Institute. “It is unacceptable for carbon trading schemes to result in forced evictions and increased food insecurity while delivering little to no improvement on access to health, sanitation, and education,” she continued. “Private and public financiers of the project, including the World Bank and other Scandinavian countries should be compelled to follow Sweden and immediately stop their support for this scandalous project.”

Note: the Swedish Energy Agency — Green Resources' sole carbon credit purchaser — announced on November 3, 2015 it has frozen payments to Green Resources after the Swedish Minister for Climate and the Environment, Asa Romson, spoke out strongly against the company's conduct. The Swedish Energy Agency says they have paid out SEK 1.2 million ($137,000) to the project. The remaining payments of up to about SEK 35 million ($4 million) will be frozen until a number of significant changes are made to the project in order to address the concerns raised by local communities.

Read The Darker Shade of Green: Plantation Forestry and Carbon Violence in Uganda and additional documentation.