With Support from the US Treasury, World Bank Reinvents Tainted Aid Program for Ethiopia

Oakland, CA—Moral Bankruptcy: World Bank Reinvents Tainted Aid Program for Ethiopia, a new report released today by the Oakland Institute, exposes the shameful reinvention of one of the Bank’s most problematic programs in Ethiopia. The report also reveals that the US Treasury violated congressional law when voting in favor of this program. 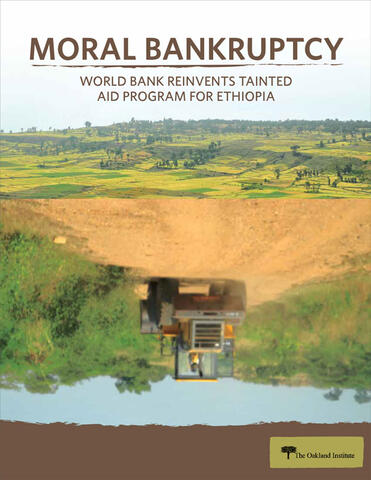 For years, the PBS program has been associated with human rights abuses and the forced relocation of indigenous communities while paving the road for large-scale land grabs. These issues were highlighted in a report by the World Bank’s own independent Inspection Panel in 2015. Rather than addressing the grave concerns raised about the program, the Bank, instead, chose to launch an almost identical initiative under a new name.

“The World Bank has turned a blind eye to the findings of the Inspection Panel and well-being of indigenous communities in Ethiopia by conveniently re-launching PBS under a new name,” said Anuradha Mittal, Executive Director of the Oakland Institute. “This incredibly irresponsible behaviour of the Bank shows that it would rather uphold the status quo than protect vulnerable communities.”

The report provides an in-depth analysis of the ESPES program, revealing its many shocking flaws and weaknesses. For instance, overlooking the climate of fear and government repression prevailing in Ethiopia, it relies on marginalized communities to self-report the abuses they are victims of and on the Government’s internal institutions to lead monitoring and evaluation efforts. Furthermore, the new program uses the same financial systems that the Inspection Panel lambasted in its report.

The report also examines the US Appropriations Bills from 2012 to 2016 to reveal that the US Treasury violated several congressional laws by voting in favor of this program.

“Congressional laws exist to ensure that US tax payers’ dollars don’t contribute to social harm,” said Mittal. “The fact that the US Treasury so blatantly ignored Congress’ orders is appalling. The US must rectify the situation, and have the Treasury explain how it could ignore Congress and disregard the protection of indigenous groups.”