Stealth Game: “Community” Conservancies Devastate Land & Lives in Northern Kenya — reveals the devastating impact of privatized and neo-colonial wildlife conservation and safari tourism on Indigenous pastoralist communities. Although terms like “participatory,” “community driven,” and “local empowerment” are extensively used, the report exposes how the Northern Rangelands Trust (NRT) and the Kenya Wildlife Services (KWS), have allegedly dispossessed pastoralist communities of their ancestral lands, through corruption, cooptation, and sometimes through intimidation and violence, to create wildlife conservancies for conservation dollars.

Since its founding in 2004, NRT has set up 39 conservancies on over 42,000 square kilometers of land in Northern and Coastal Kenya — nearly eight percent of the country’s total land area. While NRT claims that its goal is to “transform people’s lives, secure peace and conserve natural resources,” the Oakland Institute’s report elevates voices of communities — predominantly pastoralists — who allege NRT dispossesses them of their land and deploys armed security units involved in serious human rights abuses. NRT is also involved in security, management of pasture land, and livestock marketing, which according to the impacted communities, gives it a level of control that surpasses even that of the Kenyan government.

Based on extensive field research, Stealth Game: “Community” Conservancies Devastate Land & Lives in Northern Kenya, is the first independent report to provide a comprehensive review of the evolution of Kenya’s land and wildlife conservation laws; the history, structure, and functioning of “community” conservancy model of NRT; as well as land and human rights issues surrounding the privatized model of conservation in Kenya.

Created by Ian Craig, whose family was part of an elite white minority during British colonialism, NRT’s origins date back to the 1980s when Craig’s family-owned, 62,000-acre cattle ranch was transformed into its first conservancy. Today, NRT receives millions in funding from donors such as USAID, the European Union, Danish and French development agencies and large environmental NGOs, including The Nature Conservancy (TNC) and Space for Giants.

In recent years, impacted communities have held protests, signed petitions, and initiated legal action against the presence of NRT on their lands. Community members have repeatedly asked for justice after years of being ignored by the Kenyan government and by the police when reporting killings of family members and other human rights abuses. The findings of Stealth Game call for an urgent independent investigation into land and human rights related grievances around NRT’s community conservancies — including allegations of involvement of NRT’s rapid response units in inter-ethnic conflict, and of abuses and extrajudicial killings.

The report’s release comes as the international community is considering adopting the “30x30 initiative” under the UN’s Convention on Biological Diversity, which calls for 30 percent of the planet to be placed in protected areas or other effective area-based conservation measures by 2030. Stealth Game makes it clear that fortress conservation must be replaced by truly Indigenous-led conservation efforts to preserve the remaining biodiversity of the planet while respecting interests, rights, and dignity of the local communities. 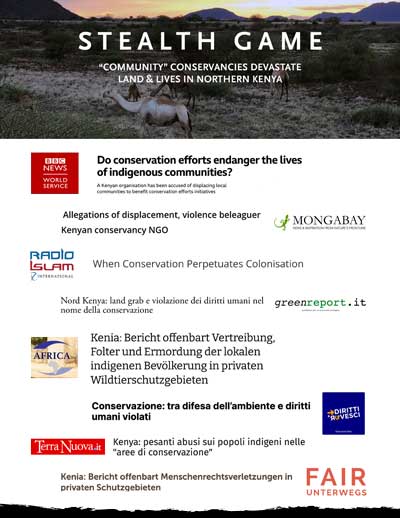 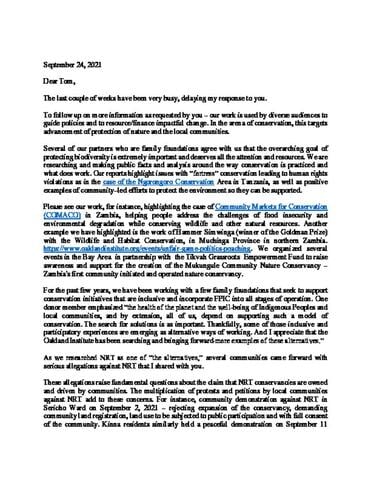 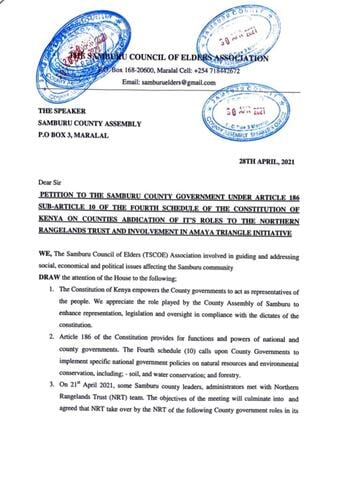