Oakland, CA — As the United Nations Human Rights Council (UNHRC) meets to discuss transitional justice and human rights in post-war Sri Lanka, a new report from the Oakland Institute, Justice Denied, exposes the many issues that continue to plague land release and resettlement in the country, and the failure of the Sri Lankan government to fulfill its international commitments to transitional justice.

The Sri Lankan military continues to occupy large quantities of land; land released by the government is often of poor quality, hindering the ability of many to rebuild their livelihoods; there is a vast and unmet need for housing and infrastructure for those displaced during the civil war; and ever-changing timelines for resettlement have bred mistrust in the government. Although the war ended in 2009, the country’s military budget has more than doubled since then, raising serious doubt about the government’s intent to demilitarize the North and East. 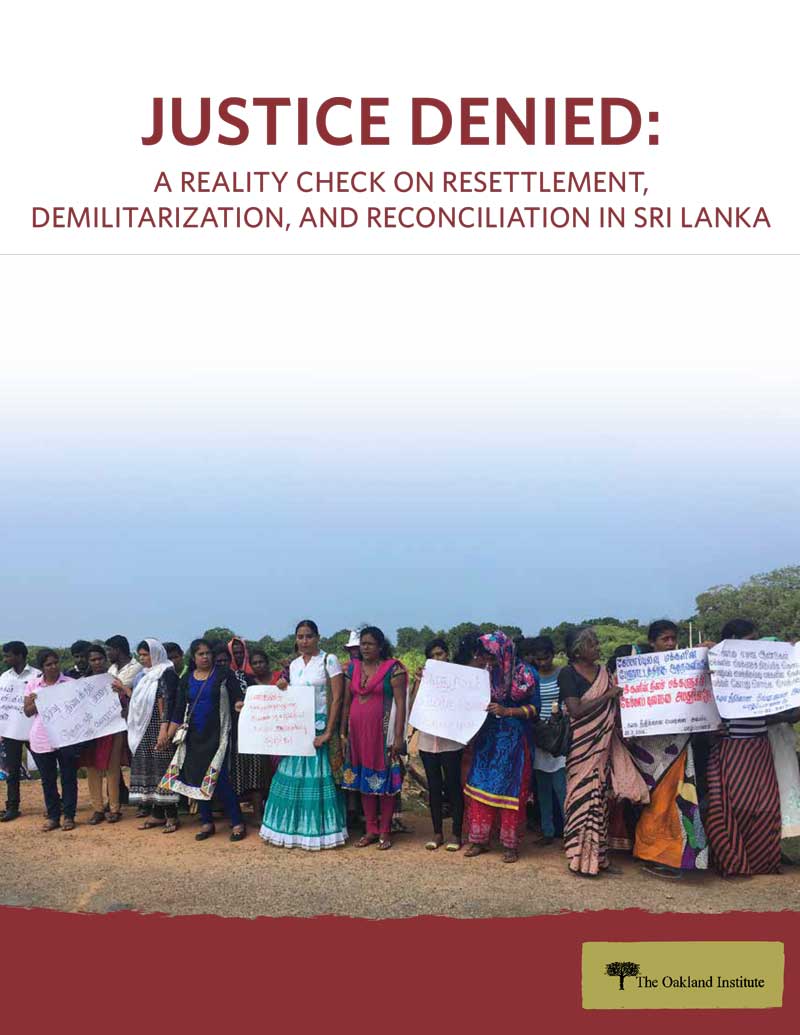 “It has been nearly eight years since the end of the civil war, but tens of thousands remain displaced in the country and there are still over 100,000 Tamil refugees in India,” commented Anuradha Mittal, Executive Director of the Oakland Institute. “In these conditions, it is appalling that the military continues to occupy land for army camps and to run business ventures and luxury tourist resorts in the North and East.”

Justice Denied also examines the actions of the Sri Lankan government over the past 16 months to fulfill its commitments to transitional justice made under UNHRC Resolution 30/1. The Resolution was an attempt to initiate a process that would bring justice for war crimes – including numerous alleged cases of rape, torture, kidnapping, and the mass killing of civilians, prisoners, and relief workers – that have gone unpunished and unaddressed by the justice system. It also addressed the issue of the tens of thousands of civilians who remain unaccounted for or missing years after the end of the war.

“This examination paints a dismal picture of justice denied and highlights the culture of impunity in the country. The government has backtracked on its promise to include international legal experts in a war crimes court, and even threatened with legal action anyone alleging war crimes by the military. Meanwhile, the Prevention of Terrorism Act is still in force,” continued Mittal. “This is not progress towards transitional justice. The attitude of the Sirisena administration makes a mockery of its international commitments. It is imperative that the international community hold the Sri Lankan government accountable to ensure that justice is delivered.”