The True Costs of Safari Tourism: Foreign Companies Devastate Tanzania's Maasai in the Name of Conservation

OAKLAND, CA, May 9, 2018 — The indigenous Maasai people of Tanzania face appalling levels of human rights abuses, including intimidation, violent evictions, arrests, beatings, and starvation, by the Tanzanian government and some of the safari businesses that operate in the country, the Oakland Institute said today in a new report.

The report specifically exposes the devastating impact of two foreign companies on the lives and livelihoods of the Maasai villagers in the Loliondo area of the Ngorongoro District — Tanzania Conservation Ltd (TCL), a safari business operated by the owners of Boston-based high-end safari outfitter Thomson Safaris; and the United Arab Emirates (UAE)-based Ortello Business Corporation (OBC), which runs hunting excursions for the country’s royal family and their guests.

According to local villagers, TCL has made their lives impossible by denying them access to water and land and cooperating with local police who have beaten and arrested the Maasai. Meanwhile, for 25 years, the OBC had an exclusive hunting license, during which time there were several violent evictions of the Maasai, many homes were burnt, and thousands of rare animals were killed. Although Tanzania’s Ministry of Natural Resources cancelled OBC’s license last year, the OBC remains active in the area, while the local villagers live in fear. 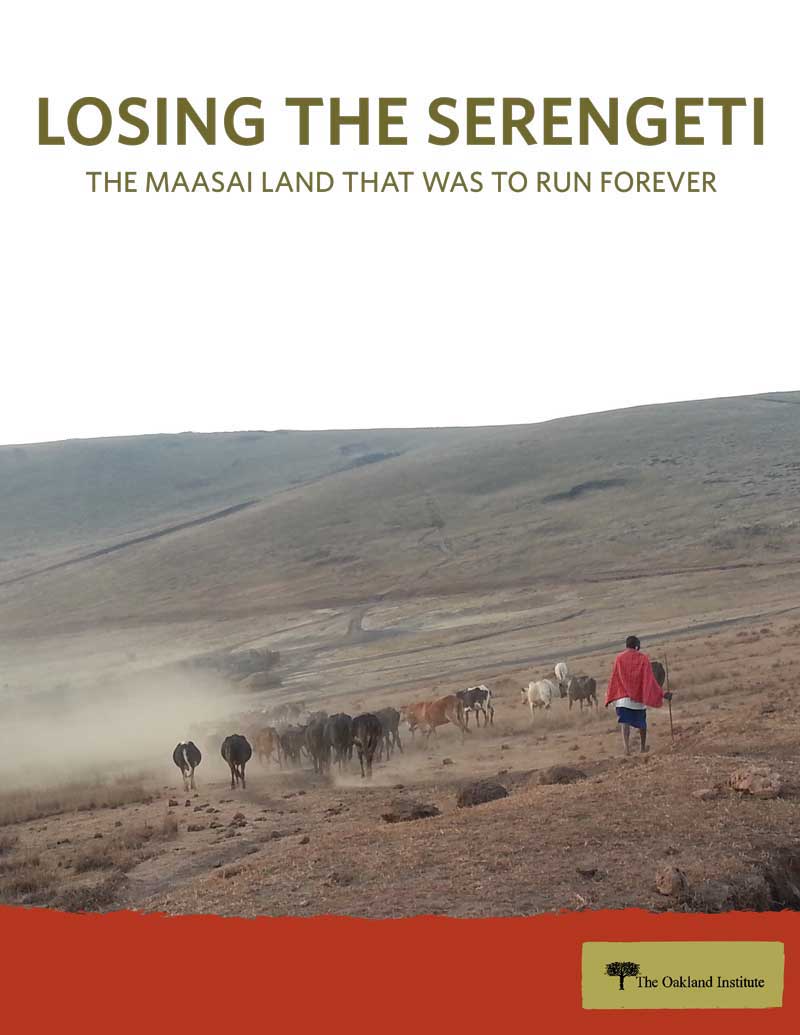 Losing the Serengeti: The Maasai Land that was to Run Forever is based on field research, never publicly-seen-before documents, and an in-depth investigation into Tanzania’s land laws. This report is the first to reveal the complicity between Tanzanian government officials and foreign companies as they use conservation laws to dispossess the Maasai, driving them into smaller and smaller areas and creating a stifling map of confinement.

“As tourism becomes one of the fastest growing sectors within the Tanzanian economy, safari and game park schemes are wreaking havoc on the lives and livelihoods of the Maasai,” said Oakland Institute Executive Director Anuradha Mittal, author of the report. “But this is not just about a specific company — it is a reality that is all too familiar to indigenous communities around the world. In too many places, governments, corporations, and even large conservation groups collude in the name of conservation, not just to force the indigenous off their land, but to force them out of existence.”

Starting in the 1950s, a series of land and wildlife “conservation” laws in Northern Tanzania pushed the Maasai off their traditional land. Additional laws passed since then have further curtailed their rights to graze cattle and grow food, leading to widespread starvation. The report brings evidence from some of the most impacted villages.

“The Tanzanian government claims these laws were created to conserve and protect ecosystems, but then it turns around and allows companies like the OBC to build a private airstrip on the very same land,” said Oakland Institute Senior Policy Analyst Elizabeth Fraser, coauthor of the report. “This is not conservation — it is the complete destruction and devastation of the lives of the indigenous stewards of the land.”

In addition to highlighting the plight of the Maasai, Losing the Serengeti recommends various ways forward. These include legal and policy remedies, and local grassroots innovations such as Certificates of Customary Right to Occupancy (CCRO) — a new model of land titling for communities to secure indivisible rights over their customary lands and manage those territories through bylaws and management plans.

Read the report: Losing the Serengeti: The Maasai Land that was to Run Forever

Open Letter to the Tanzanian Government