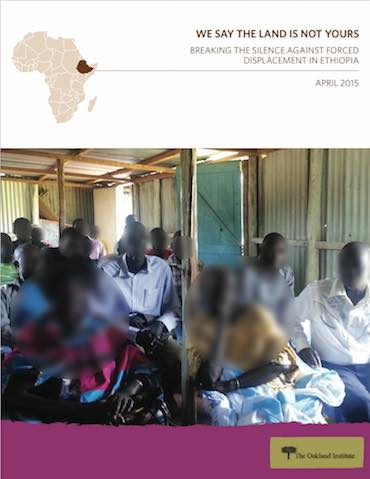 The response from the Ethiopian embassy to our report, We Say the Land is Not Yours, and the Guardian article Ethiopians talk of violence and land grabs as their land is earmarked for foreign investors, makes unfounded allegations about the work and methodology of the Oakland Institute. We are therefore compelled to respond to set the record straight.

First, We Say the Land is Not Yours, the report released on April 14, 2015, is not an organizational opinion on the situation in Ethiopia or based on “externally-based politically-motivated sources,” as you seem to suggest. Rather, this report shared word for word in a virtually unedited fashion the direct voices of Ethiopians facing persecution in their own country. Most of those who gave their testimonies for the report continue to live in Ethiopia. A few live as refugees in miserable conditions in neighboring countries, having fled their homes and land because of incidents described in their testimonies.

Second, your communiqué commented that our work is based on flawed methodology including “unverified and unverifiable information.” The rampant misuse of the Anti-terrorism Proclamation has created an environment in which there would be reprisals against those who spoke out, rather than independent investigations into their claims. Indeed, there are numerous reports of individuals being arrested and tortured for speaking to human rights organizations and the international media. Until this repressive environment changes, we will continue to withhold the names and locations of the individuals interviewed to ensure their safety.

Should you wish to demonstrate a change in this environment, the Ethiopian Government should release the names, charges, and evidence of the charges for the prison populations at Makalawi, Kaliti, Kalinto, Ziway, and Shewarobe.

Finally, you claim that Ethiopia’s ongoing development is raising the standard of living for people across the country. The limitations put on media and NGOs by the Ethiopian Government makes it impossible to verify these broad claims. Through our own research and on-the-ground fieldwork, we have witnessed the extent to which this so-called development is destroying the lives, culture, traditions, and livelihoods of many of Ethiopia’s own indigenous and pastoralist populations. There is no doubt that this strategy is unsustainable and is creating a fertile breeding ground for conflict.