Oakland/Port Moresby/Sidney — With the release of a new report today, ACT NOW!, Jubilee Australia, and the Oakland Institute, call for an urgent change of course from political leaders in Papua New Guinea. The report, From Extraction to Inclusion, analyses the country’s economic and development performance since its independence in 1975.

The main finding is that the PNG economy has relied on the large-scale extraction of abundant minerals and other natural resources, under the illusion it will improve the lives of its citizens. Yet, on most indicators, PNG is faring worse than its Pacific neighbours and any progress that has been achieved does not reflect the huge value of the resources extracted.

“PNG has allowed some of the world’s largest mining, petroleum and timber companies onto its shores to extract gold, silver, copper, nickel, oil, natural gas, tropical hardwoods and palm oil. Yet, positive changes have been limited and the economic and social development that has been repeatedly promised has not been delivered,” said Dr. Luke Fletcher, lead author of the report. 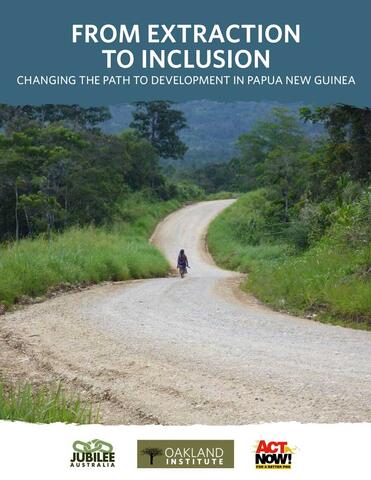 The report reveals that relying on the extraction of natural resources has failed to improve people’s lives for a number of reasons. The extractive industries tend to operate as enclaves with little connection to the rest of the economy. Foreign companies are allowed to externalise their enormous social and environmental costs while banking most of the profits offshore. They also contribute relatively little to government revenues. And the growth of these sectors has been accompanied by poor governance, theft of public money, and corruption.

“PNG has already lost much of its accessible forests — part of the third largest rainforest in the world — and this is a disaster for a country where forests constitute a key source of construction materials, food, and medicine for large swathes of the population. The pollution of land and waterways by mining waste has also had devastating consequences for local communities, compromising their access to fresh water, to food sources, and to prime gardening land,” said Frederic Mousseau, Policy Director at the Oakland Institute. Mousseau has extensively documented the wrongdoings of the logging and palm oil companies operating in the country.

From Extraction to Inclusion also details how extractive operations often involve widespread human rights abuses. Communities opposing extractive projects face repression, threats, and violence. Projects have been forced upon the communities — or they have provided consent because of empty promises that are never delivered — while legitimate dissent and protests are often met with violence and abuses by police forces or private security operatives.

Through its comprehensive and objective review of the facts and figures, this new report makes it clear that it is urgent for PNG to change course and put people back at the centre of its development policies. Eddie Tanago, Campaign Manager for ACT NOW! explained, “our nation’s most important assets are not the minerals and petroleum that foreign corporations value so highly. Our most important assets are our people, our customary land, our agricultural skills, and our knowledge of how to sustainably manage our land and resources.”

“We still have a largely rural population, living on their own land with the skills and ability to work, produce, trade, and innovate in a way that will improve their lives and those of future generations. It is these natural resources that should form the basis for people’s livelihoods, and be managed by and for the people in a sustainable, responsible, and a wise way,” Tanago continued.

From Extraction to Inclusion details the important policy shifts that the government needs to make to put people back at the centre of its economic and social development policies. “These should start with a halt to the current attacks on customary land tenure, which is the basis of the village economy and the livelihood of most of the population,” said Eddie Tanago.

The report calls on the government of Papua New Guinea to take bold steps, including rejecting new large-scale resource extraction projects, halting the expansion of oil palm, and banning round log exports. The priority should be public policy and investment in appropriate agriculture that benefits farmers, feeds the country, and uses natural resources in a responsible way. The report also recommends that local communities should be placed at the heart of future forest management and that downstream processing of sustainably and ethically produced timber products should replace the current focus on round log exports.

The three organizations recognize that the current government has made some moves in the right direction but are calling for much stronger action to show that the priority is the people of Papua New Guinea, not the largely foreign corporations and financial interests, which have been encouraged to plunder the country for over four decades.

ACT NOW! is a community advocacy organisation based in Papua New Guinea. Its vision is for a ‘gutpela sindaun blong olgeta’ (a just and equitable society) that embraces PNG’s rich and diverse cultural and biological heritage and is based on the principles of sharing, communal land ownership and environmental stewardship.

Jubilee Australia (full name: The Jubilee Australia Research Centre) engages in research and advocacy to promote economic justice for communities in the Asia Pacific region and accountability for Australian corporations and government agencies operating there.

The Oakland Institute is an independent policy think tank bringing fresh ideas and bold action to the most pressing social, economic, and environmental issues.