On Tuesday, we told you about land grabs by timber companies in Liberia that are threatening that country’s tropical rain forest. Today environmental groups and forestry experts are abuzz about a project in nearby Cameroon that is overseen by Herakles Farms, an affiliate of the New York-based company Herakles Capital that pursues agricultural initiatives in Africa. 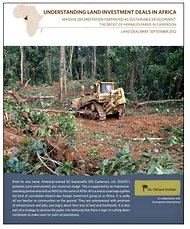 The company has acquired a huge tract of land in southwestern Cameroon under long-term lease and plans to develop one of the world’s largest palm oil plantations there. Palm oil has been increasingly cultivated in Africa and Asia because it can be sold at good prices for use in biofuels, which are in principle better for the environment than fossil fuels.

But many palm oil plantations in the developing world have proved environmentally controversial because the first step in their creation is cutting down rainforest or draining swamps – acts that cancel out any environmental benefit.

The plantations tend to be owned by multinational corporations that sell the fuel on global markets but do not necessarily heed the needs of local people or animal populations that depend on the vanishing forests. To guard against such problems, a watchdog group called the Roundtable on Sustainable Palm Oil, representing both industry and conservation groups, seeks to promote good environmental practices on palm oil plantations and respect for local communities.

Although Herakles had promised sustainable development on its Cameroonian plantation, several environmental groups, including W.W.F., have filed complaints with the Roundtable group about practices related to the palm oil project.

A new report released by Greenpeace and the Oakland Institute, an environmentally minded think tank, details numerous problems. The area to be developed, which is about eight times the size of Manhattan, is a hot spot of biodiversity, and the 99-year land lease is of questionable legal status, the groups’ researchers say. The report also asserts that the project was vehemently opposed by many of the people who live in the region.

Calls to the Herakles Corporation in New York were not returned this afternoon. But Herakles Farms has previously denied allegations made in complaints to the Roundtable group. And Reuters reported that it had obtained a copy of a letter in which Herakles affirmed its commitment to sustainable agriculture and to the standards set by the Roundtable organization.

The Roundtable group announced on Tuesday that Herakles had withdrawn from the sustainability program.

”This is a very sad day for Cameroon,” Basile Yapo, the W.W.F. director for Cameroon, said in a statement. “Given the rapid pace and scale of palm oil development in West Africa, it is critically important that the governments in the region put in place vital safeguards to insure that these projects are sustainable.”