Press Release: The World Bank and the IMF Open up Ukraine to Western Interests 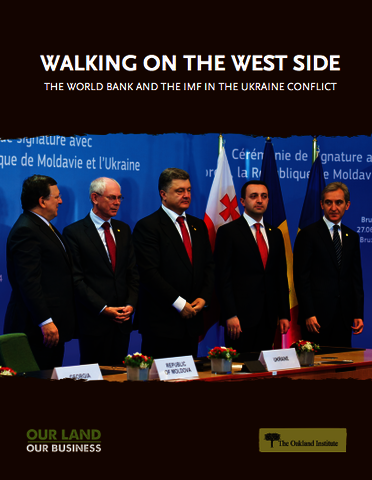 Oakland, California--A new report from the Oakland Institute, Walking on the West Side: the World Bank and the IMF in the Ukraine Conflict,exposes how the international financial institutions swooped in on the heels of the political upheaval and are vying to deregulate and throw open Ukraine’s vast agricultural sector to foreign investors. Former Ukrainian President Viktor Yanukovych’s rejection of an EU Association agreement in favor of a Russian deal was a major factor in the crisis that led to his ouster in February 2014. Immediately following the change to a pro-EU government, the country’s pivot to the West was solidified with a $17 billion loan from the International Monetary Fund (IMF) and an additional $3.5 billion aid package from the World Bank, both of which require significant economic reforms and austerity measures that are set to have disastrous effects within the nation.

The report details how the aid packages, contingent on austerity reforms, will have a devastating impact on Ukrainians’ standard of living and increase poverty in the country. Reforms mandated by the EU-backed loan include agricultural deregulation that will benefit agribusiness corporations and natural resource and land policy shifts that facilitate foreign corporate takeover of enormous tracts of land. The EU Association Agreement also includes a clause requiring both parties to cooperate to extend the use of biotechnology.

"While the World Bank and IMF often disguise their activities in other countries under the objectives of development, the case of Ukraine makes it clear that this is just Orwellian double-speak. Their intent is blatant: to open up foreign markets to Western corporations. It’s telling that one of the key reforms enforced by the Bank is that the government must limit its own power by removing restrictions to competition as well as the role of state ‘control’ in economic activities," said Frederic Mousseau, Policy Director of the Oakland Institute and co-author of the report.

“The high stakes around control of Ukraine’s vast agricultural sector, the world’s third largest exporter of corn and fifth largest exporter of wheat, constitute an oft-overlooked critical factor. In recent years, foreign corporations have acquired more than 1.6 million hectares of Ukrainian land,” he continued. An additional deal signed with China for 3 million hectares of farmland in September 2013 is in limbo, since it is unclear whether the freshly minted government and its new Western allies will allow it to go forward.

Walking on the West Side exposes how the international financial institutions serve the interests of agribusiness corporations through deregulation of the food and agriculture sectors and policies favoring foreign land acquisitions. Ukraine is also one of the 10 pilot countries in the World Bank’s new Benchmarking the Business of Agriculture (BBA) project, a widely criticized ranking system that promotes agricultural policy reforms including the deregulation of seed and fertilizer markets.

“The Bank’s activities and its loan and reform programs in Ukraine seem to be working toward the expansion of large industrial holdings in Ukrainian agriculture owned by foreign entities,” said Mousseau.

Beyond agriculture, it is expected that reforms pitched as a means to improve the business climate and increase private investment in the country will have a devastating social impact, resulting in a collapse of the standard of living and dramatic increases in poverty.

The acceleration of structural adjustment led by the international institutions following the installation of a pro-West government is likely to further expand foreign acquisitions of agricultural land and extend the corporatization of agriculture in the country. The structural adjustment program will also likely increase foreign control of the economy while increasing poverty and inequality in the country. The World Bank and the IMF, however, have failed to demonstrate how such programs will improve the lives of Ukrainian citizens and build a sustainable economic future.

Read the press release in Russian