OAKLAND, Calif. (March 31) -- Today, the Oakland Institute and /The Rules, along with other NGOs, farmer and consumer organizations from around the world launch a campaign, Our Land Our Business, to hold the World Bank accountable for its role in the rampant theft of land and resources from some of the world’s poorest people--farmers, pastoralists, and indigenous communities, many of whom are essential food producers for the entire planet.

“The World Bank is facilitating land grabs and sowing poverty by putting the interests of foreign investors before those of locals,” said Anuradha Mittal, Executive Director of the Oakland Institute.

“Smallholder farmers and herders are currently feeding 80 percent of the developing world. Casting them aside in favor of industrial farming corporations from the West betrays the World Bank’s reckless and short term approach to development,” said Alnoor Ladha, Executive Director of /The Rules.

The Bank’s “Doing Business” rankings, which score countries according to how Washington officials perceive the “ease of doing business” there, have caused many developing-country leaders to deregulate their economies in hopes of attracting foreign investment. But what the World Bank considers beneficial for foreign business is very often the exact opposite for existing farmers and herders. 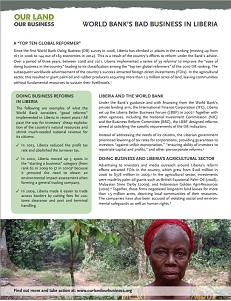 In the agricultural sector, the rankings encourage governments to commoditize their land--and to sell or lease it to foreign investors, regardless of environmental or social impact. Smallholder farmers, pastoralists, and indigenous people are casualties of this approach, as governments and foreign corporations work hand-in-hand to dispossess them of their land--and gain World Bank approval in the process.

The results have already been devastating. Thanks to reforms and policies guided by the Bank, Sierra Leone has taken 20 percent of its arable land from rural populations and leased it to foreign sugar cane and palm oil producers. And in Liberia, British, Malaysian, and Indonesian palm-oil giants have secured long-term leases for over 1.5 million acres of land formerly held by local communities.

Now the land grab problem is about to get worse. Under pressure from the G8 and with funding from the Gates Foundation, the Bank is doubling down on its rankings fetish by introducing a new program called “Benchmarking the Business of Agriculture” (BBA). The BBA’s explicit goal is to promote “the emergence of a stronger commercial agriculture sector.” Its rankings will prize deregulation of the agriculture sector and is expected to enable further land grabbing around the world.

“We’re standing up with farmers, herders, and indigenous peoples of the developing world who are being steamrolled by the World Bank’s pro-corporate agenda,” added Mittal. “Initiatives like the World Bank’s ‘Doing Business’ rankings encourage governments to steal from the poor in order to give to the rich. That must end.”

For more information or to schedule an interview with Anuradha Mittal and Alnoor Ladha, please contact Kristen Thomaselli at (202) 471-4228 ext. 101 or [email protected].

About the Oakland Institute
The Oakland Institute is an independent policy think tank whose mission is to increase public participation and promote fair debate on critical social, economic and environmental issues (www.oaklandinstitute.org).

About /The Rules (/TR)
/TR is a global network of organizers and activists that aim to challenge and redistribute power in favor of those among us who are currently the most marginalized and impoverished. /TR works with existing civil society organizations, social movements, and grassroots organizers to create trans-local campaigns that mobilize people to change the policies, practices, beliefs and cause inequality and poverty (www.therules.org).