Press Release: Will Cameroon Bear the Brunt of Herakles’ Implosion?

The embattled Herakles Farms palm oil plantation project in Cameroon appears to have now gone off the rails. Recent news of CEO Bruce Wrobel’s early retirement from parent company Sithe Global, plus charges of corruption filed in the US by Cameroonian NGOs and the virtual disappearance of All for Africa, an NGO (chaired by Bruce Wrobel) that granted a faux “green” legitimacy, combine to indicate that failure is at hand for the maligned project.

The word on the ground points to a dire financial situation and an erosion of faith in Herakles Farms by investors and company’s own workers. Herakles Farms had purported to herald a new era of “sustainable agriculture” by replacing old-growth rainforest with palm oil plantations. But the company has faced a series of setbacks since the Oakland Institute and Greenpeace International released a report in May 2013 documenting false promises, risks, and legal flaws in Herakles’ planned operations.

Since the report’s release, we have seen the following developments:

“Even if the size of the project is reduced, the fragility of Herakles Farms is a high concern,” said Anuradha Mittal, Executive Director of the Oakland Institute. “It is an unsustainable project, led by a company known for serious wrongdoing, which will take over and destroy people’s farmland and Cameroon’s vital natural resources. Given the project is well below minimum sustainability standards, it begs for immediate intervening review and action by the Cameroonian government,” she continued. 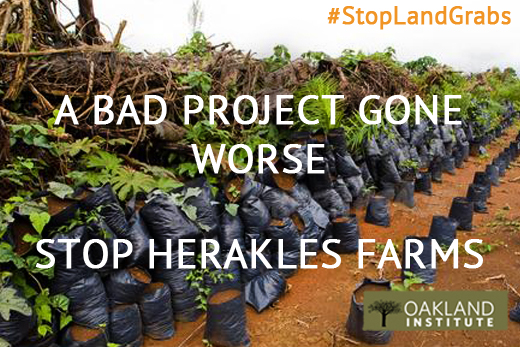