Oakland, Calif. (Feb. 18) -- The wolves of Wall Street are eyeing millions of acres of U.S. farmland that will soon come up for sale, much of which has been in the hands of family farmers for generations, according to Down on the Farm, a new study from the Oakland Institute. 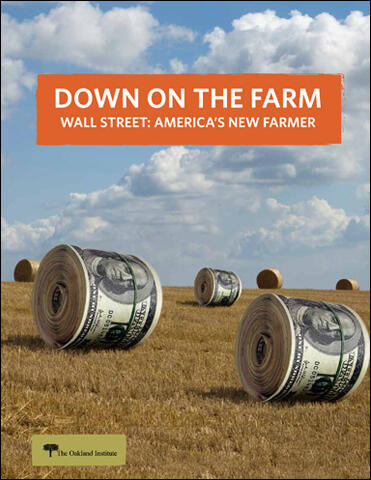 "Institutional investors"--including hedge funds, private equity, pension funds, and university endowments--have trained their sights on America's agricultural infrastructure," said Lukas Ross, an Oakland Institute Fellow and author of the report. "If they succeed in consolidating control over our land and infrastructure, this new class of land barons could imperil our nation's food supply."

Investors are increasingly interested in capitalizing on the run-up in the value of private-equity assets. So they're lining up to purchase some 400 million acres that will become available over the next two decades. That's half of all U.S. farmland.

These would-be owners see $1.8 trillion in land that could be exploited for industrial farming as well as fracking and fossil-fuel production. But their pursuit of a quick buck is driving land prices up, imperils farmers' economic future, the viability of the farm and rural economy, and jeopardizes the long-term health of the land.

Relying on material from the Freedom of Information Act, the report exposes shocking details of unsafe and environmentally irresponsible practices of absentee investor-owners--as well as legal battles over major labor violations.

Down on the Farm also profiles several farmers who are struggling to get or hold onto land of their own, thanks in part to the Wall Street-driven run-up in farmland prices.

Initiatives like the Agrarian Trust and California FarmLink are providing critical support to U.S. farmers. But more must be done.

"We must act to ensure that farmers--not non-operational owners with decidedly less noble intentions--remain in control of our nation's farmland," said Anuradha Mittal, Executive Director of the Oakland Institute. "If we don't, America's agricultural heritage--not to mention our ability to produce enough food to feed our people--could disintegrate."