Oakland, CA – Papua New Guinea (PNG) is the latest known victim in a modern era of land grabs orchestrated by foreign corporations according to an investigative report and a film, On Our Land, released today by the Oakland Institute and the Pacific Network on Globalisation (PANG). In one of the swiftest and largest land grabs in recent history, close to a third of the country has now been appropriated by foreign companies. Thinly veiled illegal logging operations are destroying the world’s third-largest rainforest and taking away land and heritage from the people of PNG. 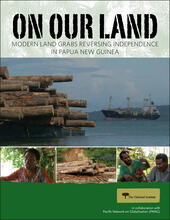 On Our Land reveals how the current devastating land grab is happening with the de facto approval of PNG’s government as well as the failure of the country’s prime minister, Peter O'Neill, to act on a government-sponsored inquiry, which revealed a shocking trend of corruption and mismanagement in recent land deals. The tabled report on Special Agriculture and Business Leases (SABLs), the scheme used to free up customary land for so-called productive use, showed that the program had, in the prime minister’s own words, “failed miserably.”

“After years of looking at large-scale land acquisitions in Africa, we thought we had heard about almost every scenario of deception and collusion. Papua New Guinea was an eye-opener,” said Frederic Mousseau, Policy Director at the Oakland Institute and author of the report. “Despite its own findings, the government has taken no action to reverse any of the 70 land deals and return land titles to citizens. From faked signatures and coercion to sheer bullying of communities, unlawful deals that fail to meet minimal guidelines are moving forward.”

Funded by a Kickstarter campaign and narrated by Paul Hawken, the film On Our Land and the accompanying report expose the policies that have allowed for land acquisitions that reverse land rights Papua New Guineans achieved after national independence in 1975. They also show the human and environmental cost of land and resource loss. Together, they give a revealing view of the intricately twisted world of land grabbing and unravel how and why the government of a country like PNG, with the most egalitarian and protected customary land rights, would betray its own citizens and the constitution.

"Land for the people in the Pacific is much more than a commodity; it is a source of welfare, livelihood, identity, and a social safety net,” said Serah Aupong of PANG. “As we continue to struggle for essential services for the majority of the people, access to customary land fulfills our basic needs. The complicity of the government of Papua New Guinea in allowing this theft of land to continue is a gross injustice that demands immediate attention and correction," she continued.

Visit OnOurLandFilm.com for information on the film

To get a copy of the film, On Our Land, write to [email protected]

PANG is a Pacific regional network promoting economic self-determination and justice in the Pacific Islands. (www.pang.org.fj)