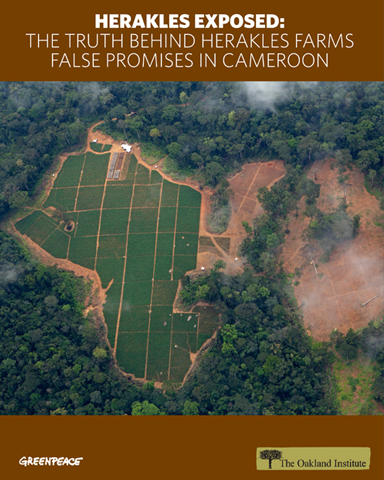 May 22, 2013, Oakland, California – Misleading of investors and corruption are just two of the deceitful tactics believed to be employed by New York-based agribusiness company Herakles Farms as it attempts to clear tens of thousands of hectares of Cameroonian rainforest for a large palm oil plantation, according to a new report from the Oakland Institute and Greenpeace International.

Herakles Exposed: The Truth behind Herakles Farms reveals widespread misconduct by Herakles Farms. A series of internal company communications and documents uncover a sharp contrast between what its executives communicate publicly and what they are conveying to investors and the reality on the ground.

Furthermore as this report is released Herakles Farms has responded to an order from the Cameroonian ministry of forest and wildlife by saying they have suspended all clearing work on the plantation. More evidence that the project is beset by problems and far from the investment opportunity the company would have people believe.

“It is hard to decide which of the revelations is the most startling,” says Anuradha Mittal, the founder and Executive Director of the Oakland Institute.

“Be it that the company apparently knew it was operating in Cameroon without all required permits and authorizations; that Herakles Farms is telling investors how much they could earn from selling timber after they had said previously the wood would be given to the Cameroonian government; or that bribery may have been used in the attempt to gain consent and other approvals for the project.”

The palm oil project has been beset with controversy and opposition since it was first announced in 2009. If not stopped it would destroy a forested area of great biodiversity–-over eight times the size of Manhattan, and destroy the livelihoods of communities that rely on the area.

“Allowing this project to proceed would set the wrong precedent for new palm oil investors in Cameroon. Greenpeace is calling for an immediate halt to the Herakles Farms project as it simply is the wrong project in the wrong place”, says Laila Williams, Greenpeace US forest campaigner.

“Any agribusiness project in Africa should fully respect the rights and livelihood of the affected communities and cannot involve forest destruction.”

The Herakles Farms project exemplifies the threat of land grabs in Africa. Such palm oil project, conducted in contravention of national law, despite opposition from many local residents, and in a densely forested area, should not be allowed.

The Oakland Institute and Greenpeace International are joining local Cameroonian and international groups in calling for an end to this project before it creates any more social, economic, and environmental damage. Investors, insurance companies and anyone considering a relationship with Herakles Farms should carefully weigh the risks of engaging with such a harmful project.

The full report and more information on the Oakland Institute’s and Greenpeace campaign on the Herakles Farms issue can be found at:  http://www.oaklandinstitute.org/land-deals-africa-cameroon and http://www.greenpeace.org/international/africa-palm-oil/?ref=congobos

About Greenpeace International: Greenpeace is an independent, campaigning organisation which uses non-violent, creative confrontation to expose global environmental problems, and to force the solutions which are essential to a green and peaceful future. www.greenpeace.org