October 15, 2013, Oakland, CA—A report released today reveals that industrial timber plantations owned by Harvard University in the Corrientes province of Argentina have degraded the Iberá Wetlands ecosystem and endangered thousands of small-holder farmers in the region. The report is a joint publication of the Oakland Institute and the Responsible Investment at Harvard Coalition. 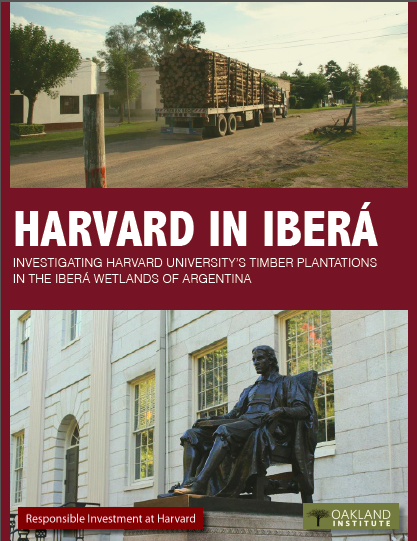 The report’s findings contradict recent statements by Harvard University President Drew Faust about the university’s investment practices. Two weeks ago, she wrote of Harvard’s “commitment to sustainable investment” and its “distinctive responsibilities to society.”

“When I saw how the plantations have invaded the wetlands, I felt sick to my stomach,” said Sam Wohns, the report’s author. “As a Harvard student, I shouldn’t be benefiting from environmental destruction halfway across the world.”

Together, Harvard’s timber companies in Corrientes, Argentina--EVASA and Las Misiones--are worth $55.2 million and encompass 217,166 acres of land. Since it purchased the companies in 2007, the university has rapidly expanded the timber plantations into protected wetland areas and surrounding communities.

According to residents in nearby communities, the plantations reduce the productivity of their farms, create public health problems, and cause damage to public roads.

"Harvard has repeatedly tried to hide its reckless behavior in the Iberá Wetlands under the guise of responsible investment," said Anuradha Mittal, executive director of the Oakland Institute. "This report by Harvard students is a call to maintain the integrity of the university’s investments.”

The Responsible Investment at Harvard Coalition is calling on Harvard University President Drew Faust to implement the report’s proposals, which are based on interviews conducted with community members, plantation workers, and other stakeholders.

"This student-written report is a milestone for responsible investment in higher education,” said Dan Apfel, an expert on university endowments and the executive director of the Responsible Endowments Coalition. “Harvard should put a stop to the dangerous expansion of its plantations in the Iberá Wetlands and start investing its entire $32.7 billion endowment responsibly.”

Join the rally on Friday, October 18

The Oakland Institute is an independent policy think tank, bringing fresh ideas and bold action to the most pressing social, economic, and environmental issues of our time.

The Responsible Investment at Harvard Coalition is a group of students, alumni, professors, and workers advocating for Harvard’s endowment to become more responsible, transparent, and accountable.