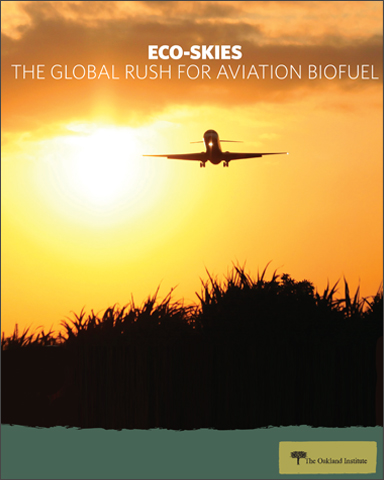 Oakland, CA: A new report from the Oakland Institute, Eco-Skies: The Global Rush for Aviation Biofuel, cautions against the ambitious goals of the aviation industry to reduce emissions by 2050. The report finds that the pursuit of this goal will bring an unprecedented expansion into biofuel production, more than likely in poorer countries, and will involve the acceleration of land acquisitions already threatening the lives and livelihoods of people in developing countries.

On the surface, the idea of a strategy that relies heavily on renewable and ostensibly environmentally-friendly biofuel sounds like a positive step for the airline industry. If only it were based in fact and there was evidence to indicate future success. This new report finds that both the potential environmental impact and toll on human lives has not been adequately factored into assessments of this new goal. On the contrary, the pursuit of biofuels for the aviation industry’s fuel needs raises serious questions about the type of new environmental and human disasters this path could lead to.

A huge amount of fuel is needed to fly planes. Currently, biofuel is too scarce and expensive for serious commercial use. Lukas Ross, OI Fellow and author of the report, acknowledges that airlines are caught between economic constraints and environmental problems with fossil fuels and CO2 emissions. Airlines would like to see biofuels as the answer to both challenges, but, Ross says, “given the mind-boggling land requirements needed to meet the industry's CO2 target, aviation biofuel has a price tag that neither people nor the planet should have to pay.”

To meet current aviation needs--let alone future increases in demand--it would take 270 million hectares of jatropha, produced on an area roughly the equivalent of one-third of Australia, or 25 times the amount expected to exist in 2015.

Even a quarter of the required area equals a Texas-size chunk of land that would no longer be available to grow food. Considering the sheer quantities of biofuel required compared to the amounts that currently exist, it is impossible to look into the future and guarantee that the drive to procure commercial quantities will not result in unsustainable, food security–threatening land grabs.

Perhaps to alleviate these fears, the airline industry founded the Sustainable Aviation Fuel Users Group (SAFUG), and signed a nonbinding pledge to only pursue biofuels in a way that protects biodiversity, does not compete with food, and ensures significant life cycle GHG reductions.

Although the pledge sounds good on paper, there are already reasonable questions about the social and environmental costs of the biofueled flights that have already flown (1,500 as of May 2012), and even more pointed questions about the possible costs if aviation biofuels are ever fully commercialized.

The new report also looks at the drawbacks of used cooking oil conversion as a source of commercial aviation fuel. The idea that planes can be powered with the same oil that McDonald’s uses to make its fries makes sustainability something novel and convenient that requires nothing in the way of lifestyle change.

The truth is that in 2010 the US produced 1,403.6 million pounds of used cooking oil-- converting every drop into aviation biofuel would still only produce about 185 million gallons. Given that in 2012 the US alone consumed roughly 21 billion gallons of jet fuel, this means that diverting all the used cooking oil in the US would keep American planes in the air for less than three days.

Such an enormous gap between potential demand and available supply means that no airline can seriously contemplate used cooking oil as a path to sustainability.

“The airline industry, hungry for price stability and a green image, is in danger of creating an unprecedented demand for biofuel that could have catastrophic consequences for land rights, food security, and GHG emissions,” said Anuradha Mittal, executive director of the Oakland Institute. “The production of biofuels is now the largest single purpose of land deals in the developing world. As low-income countries are encouraged to embrace commercial agriculture as a path out of poverty, a host of problems have erupted. Our research has exposed how poorly conceived economic development plans have led to greater food insecurity, forced displacement, and environmental damage.”

Eco-Skies thus gives analysts in the airline industry a warning to look closely at the data before the developing world is shouldering the human and environmental cost of poorly conceived solutions, yet once again.

The Oakland Institute is an independent policy think tank bringing fresh ideas and bold action to the most pressing social, economic, and environmental issues of our time. Since 2011, the Institute has unveiled land investment deals in Africa that revealed a disturbing pattern of a lack of transparency, fairness, and accountability. The dynamic relationship between research, advocacy, and international media coverage has resulted in an amazing string of successes and organizing in the U.S. and abroad. See www.oaklandinstitute.org.