Press Release: Do You Know What Your Pension Fund is Doing in Africa?

It's 2 am in Africa--Do You Know What Your Pension Fund is Doing There?

Oakland, CA: Following the 2007-2008 financial crisis and the collapse of the housing market, private equity funds have found a new lucrative soft commodity market to invest in--farmland. In a short period of time, obscured from public view, the flow of private capital into farmland and agriculture has grown dramatically worldwide.

In recent years, the private financial sector has already invested between $10 to $25 billion in farmland and agriculture with little to no oversight; given current investment trends, this amount might double or triple in the coming years. Although agricultural funds are portrayed as positive social investment to help alleviate hunger and the effects of climate change, evidence demonstrates that large land deals are often detrimental to food security, local livelihoods, and the environment--yet little is known about the specific firms and funds driving this investment. 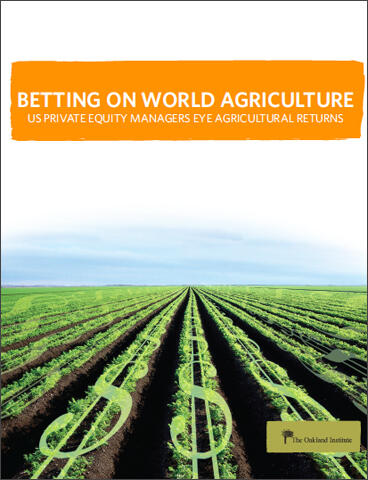 Betting on World Agriculture: US Private Equity Managers Eye Agricultural Returns, a new report from the Oakland Institute (OI), focuses on the private investment vehicles that advertise and manage investment opportunities in farmlands and agriculture for investors including pension funds, university and foundation endowments, and high net worth individuals. Based on months of research, involving literature review, interviews with fund managers, and examination of public as well confidential internal documents, the report casts a light on this hidden trend by profiling private investment vehicles that are either based in the US or aggressively promoting farmland and agriculture in the US.

Asking pointed and value-based questions that go beyond the usual terrain of yields and risks, the new report sheds light on the complex world of funds and investment activity and the ethical obligations involved. By doing so, the report highlights how these funds are managed and the type of investments that are being made in various regions of the world in order to inform concerned citizens, investors, and policy makers about the domestic and international impacts of such investments.

"The large buying power of these groups warrants an investigation into the overall impact of this investment activity on economic development, food production, rights of local communities, and the environment," said Caroline Bergdolt, coauthor of the report. "In addition, for those already promoting social and environmental returns to raise funds and garner special incentives from governments, demonstrating a lasting, meaningful impact should be a must. Yet, a lack of information prevails," she continued.

Considered the next big thing and "[farmland] gold with a coupon,"[1] with some funds aiming to become the "Exxon Mobil"[2] equivalent of the agricultural sector, there is much cause for concern. Within this context, it is particularly troubling that information regarding agricultural and land investments is highly inaccessible, densely layered, and hidden from the public.

In fact, of the 23 intermediaries researched and profiled, including Global Environmental Fund, George Soros, Farm Lands of Africa, and the Westchester Group and Teachers Insurance & Annuity Association - College Retirement Equities Fund (TIAA-CREF), only five responded to requests for direct contact after the Institute's repeated attempts.

"The fund managers are not forthcoming around details of investments and in general operate under a veil of secrecy. Some companies use reverse mergers with video game-sounding entities like 'Kryptic Entertainment' to create US-based public shells as well as onshore-offshore partnerships," said Anuradha Mittal, executive director of the Oakland Institute and coauthor of the report. "At best, fund managers give lip service to the belief that they are contributing to a win-win situation where they can make enormous amounts of money while contributing to food production and poverty alleviation."

One CEO, Mark Keegan of Farm Lands of Africa, went so far as to say to OI researchers:
"I have absolutely no doubt that what we are doing here is 'good' because of the VERY pressing need for food and the poverty. I am unashamed of wanting to make money from it and super confident that the imperative of profit will succeed where aid-driven ventures have failed. Having said that, I am also aware that success will bring social upheaval. I never stop pointing this out to African governments so that they can plan whilst they have time to think about it."[3]

Mittal responded, "Planning for and responding to social upheaval isn't part of the investment strategy or commitment of private equity investing in agriculture. Just like the land deals themselves, it is extremely difficult for concerned citizens, students, teachers, and others to find out about agricultural funds. Public information is limited and fund managers maintain an aura of secrecy. There would be no need to delve into the details of the funds if they weren't having an adverse--and growing--impact on peoples' lives."

The Oakland Institute has gained a reputation for taking on difficult areas in issues related to land investment after publishing a series of reports and briefs in the last three years. The OI's findings of further political destabilization, impoverishment, and environmental devastation as a result of these investments has led to this new study on private funds and their outsized consequences and lack of accountability.

With a preface by Dan Apfel, executive director of Responsible Endowments Coalition, this report is clearly responding to a call from citizens who want to know more about where their money is, and what it is doing.

According to the Institute, "We believe that more often than not, when given a choice, and armed with better information, people prefer that their funds are invested elsewhere and not in short-sighted endeavors that have long-term and devastating effects."

Read the Frequently Asked Questions about this research