Press Release: 180 Organizations from around the World Demand that the World Bank Shut Down Its Business Rankings & Benchmarking

OAKLAND, CA (April 10) – As the spring meetings of the World Bank get underway in Washington, DC, 180 organizations, including NGOs, unions, and farmer and consumer groups from over 80 countries, demand that the World Bank end its Doing Business rankings and its support of the rampant theft of land and resources from some of the world’s poorest people -- farmers, pastoralists, and indigenous communities, many of whom are essential food producers for the entire planet. 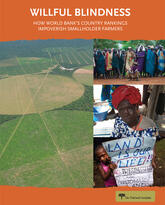 “The World Bank is facilitating land grabs and sowing poverty by putting the interests of foreign investors before those of locals,” said Anuradha Mittal, Executive Director of the Oakland Institute.

“Smallholder farmers are the first investors and employers in the agricultural sector in developing countries. Instead of supporting them, the World Bank encourages the looting of their resources for the benefit of foreign companies and local businessmen,” said Alnoor Ladha, Executive Director of /The Rules.

The Bank’s “Doing Business” rankings, which score countries according to how Washington officials perceive the “ease of doing business” there, have caused many developing-country leaders to deregulate their economies in hopes of attracting foreign investment. But what the Bank considers beneficial for foreign business is very often the exact opposite for the local communities.

“The Doing Business ranking and the new Benchmarking the Business of Agriculture that the Bank is currently developing is pushing governments to give away their country to private interests. They should instead support family farms and secure their durable access to land, which is the key to the economic, social and environmental future of our countries,” said Ibrahim Coulibaly, President of the Coordination Nationale des Organisations Paysannes du Mali (CNOP) and Vice President of the network of Peasant organizations and Producers in West Africa (ROPPA).

In the agricultural sector, the rankings encourage governments to commoditize their land -- and to sell or lease it to foreign investors, regardless of environmental or social impact. Smallholder farmers, pastoralists, and the indigenous peoples are casualties of this approach, as governments and foreign corporations work hand-in-hand to dispossess them of their land -- and gain World Bank’s approval in the process.

The results have been devastating. Thanks to reforms and policies guided by the Bank, 20 percent of the arable land in Sierra Leone taken from rural populations has been leased to foreign sugar cane and palm oil producers. In Liberia, British, Malaysian, and Indonesian palm-oil giants have secured long-term leases for over 1.5 million acres of land formerly held by local communities. In the Philippines, world’s third most popular destination for foreign investment in land, 5.2 million hectares have been acquired by corporations since 2006.

"Doing Business ranking is a sword of Damocles over the heads of our leaders who wait for their next score in the ranking to gain legitimacy before the international financial institutions, those who prescribe development schemes for our countries, instead of the citizens. We want our autonomy to decide the future of our land, agricultural and food policies,“ said Amadou Kanoute, Director of CICODEV Africa.

The land-grab problem is about to get worse. Under pressure from the G8 and with funding from the Gates Foundation, the Bank is doubling down on its fetish for rankings by introducing a new program called “Benchmarking the Business of Agriculture” (BBA). The BBA’s explicit goal is to promote “the emergence of a stronger commercial agriculture sector.”

“The BBA will limit governments' capacity to pursue their own food policy objectives, further enable the corporate takeover of land and other resources and reduce labor protection for agricultural workers who already suffer from serious decent work deficits, ” said Ron Oswald, general secretary of the global food and agricultural workers union, IUF.

“We’re standing up with farmers, herders, and indigenous peoples of the developing world who are being steamrolled by the World Bank’s pro-corporate agenda,” added Anuradha Mittal. “Initiatives like the World Bank’s ‘Doing Business’ rankings encourage governments to steal from the poor in order to give to the rich. That must end.”

For more information or to schedule an interview spokespeople of the campaign please contact Kristen Thomaselli at (202) 471-4228 ext. 101 or [email protected].

For more information on the campaign, please write to ourland[email protected]