In a briefing paper released today, Land Summit or Land Grab?, the two organizations detail how the summit organized on May 1-3 2019 is an attempt by the PNG government to ‘mobilize’ customary land to allow greater access to multinational companies and commercial banks for logging, mining, and industrial agriculture leases. 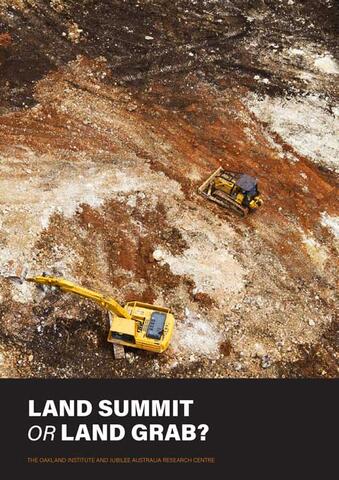 “The government claims that customary land is underutilized and thus prevents economic progress and development,” said Dr Luke Fletcher, Executive Director of Jubilee Australia. “It is actually the opposite: Over the past few decades the extractives sector (usually defined as mining, oil and gas) has not benefitted most people in PNG. Nor have the logging and associated oil palm plantations,’ continued Fletcher.

“Whereas the government claims that the objective of the Land Summit is not to take away customary land from its owners - as stated in the country’s 2019 budget - land reform is a key strategy to favor land-based private sector growth,” said Frederic Mousseau, Policy Director of the Oakland Institute. “This growth will result in an expansion of logging, palm oil, mining and oil and gas sectors, which have already exploited and depleted much of PNG’s natural resources. They have led to poor development outcomes, destruction of livelihoods, environmental degradation, social conflict, and contributed to climate change through deforestation,” continued Mousseau.

The informal economy and the agriculture sector in PNG depend heavily on the maintenance of the customary land tenure system. The new brief details myriad commercial and productive activities, even for the export market, that can be developed without destroying land rights of the communities. The brief contends that instead of devising new schemes to steal customary lands from their owners so that foreign businesses and banks can profiteer, the PNG government should focus on local initiatives that will help maximize the benefits for the national economy and the people.

The Oakland Institute is an independent policy think tank bringing fresh ideas and bold action to the most pressing social, economic, and environmental issues of our time.

Jubilee Australia (formal name: the Jubilee Australia Research Centre) engages in research and advocacy to promote economic justice for communities in the Asia-Pacific region and accountability for Australian corporations and government agencies operating there. www.jubileeaustralia.org