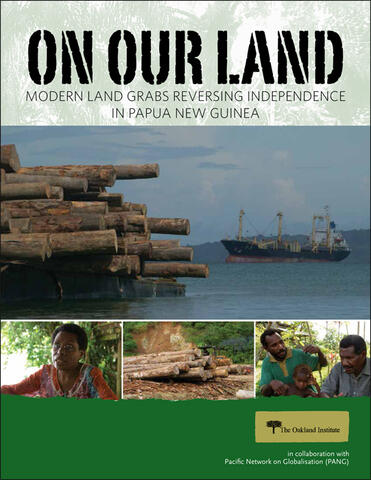 Oakland, California – The Oakland Institute, the Pacific Network on Globalization (PANG), and the Bismark Ramu Group welcome the announcement by Prime Minister Peter O’Neill that Papua New Guinea will cancel all illegally issued Special Agricultural Business Leases (SABLs) and abolish the provisions of the Land Act that allow for SABLs to be granted. SABLs have resulted in more than 5.5 million hectares of land in Papua New Guinea being taken over by foreign corporations. The SABL mechanism has allowed logging companies to lease customarily-owned land through the guise of developing agricultural projects, which merely serve as fronts for unlawful logging operations that destroy the environment and devastate local communities. The Prime Minister’s decision refers to the investigation by the Commission of Inquiry (COI), which determined that the majority of the leases were in flagrant infringement of laws and fraught with abuse and corruption.

“While we are pleased by the recent turn of events, we remain concerned that only 28 out of the 42 SABLs investigated by the COI will be revoked, when most of them were declared illegal by the COI,” said Maureen Penjueli, PANG’s Executive Director.

“It has taken one year since the release of the COI report in June 2013 for the Prime Minister to make this announcement and still no deadline has been set for the implementation of the decision. Papua New Guineans have good reasons to be doubtful about the actual willingness of the government to act,” said Frédéric Mousseau, Policy Director at the Oakland Institute.“ If O’Neill’s administration wants to follow through on their word, then it needs to act swiftly to revoke all illegal leases, cease all illegal logging, and restore the land to the rightful communities,” he continued.

The Oakland Institute, PANG, and the Bismark Ramu Group are calling on the PNG government to ensure that the rule of law is restored to impacted communities and that they will no longer be threatened by corrupt legal authorities or logging companies. Lastly, the cancellation of the leases is not sufficient. The communities who have been moved off of their land, seen their forests and livelihoods destroyed, and suffered abuses at the hands of logging companies and police forces must be fairly compensated.

“The PNG government needs to be held accountable to its word. In order to bring about real welfare improvement and economic development, the Prime Minister needs to right previous injustices to demonstrate that the nation is not at the whim of foreign corporate interests,” said Rosa Koian of the Bismark Ramu Group.

Final Report of the Commission of Inquiry into the Special Agriculture and Business Lease (SABL), June 24, 2013. http://www.coi.gov.pg/documents/COI%20SABL/Numapo%20SABL%20Final%20Report.pdf