In the 1980s and 1990s, the World Bank and International Monetary Fund’s (IMF) intervention in developing countries’ national policies, through aid conditionality and austerity programs known as Structural Adjustments Programs (SAPs), triggered a wave of global resistance against the International Financial Institutions (IFIs). in the face of growing criticism that these policies increased poverty, debt, and dependency on rich countries, saps were eventually withdrawn in 2002; however the World Bank, through renewed means, continues to pursue and impose its neoliberal agenda on the developing world. 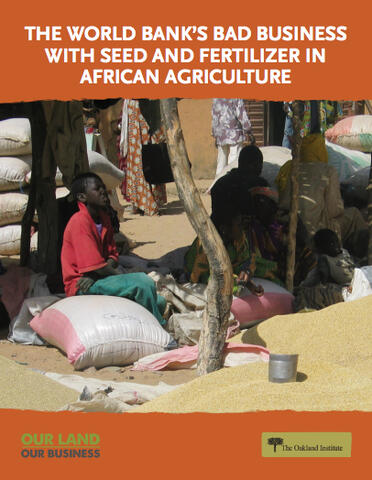 In its 2013 Growing Africa report, the World Bank argued “wider uptake and more intensive use of improved seed, fertilizer, and other inputs would go a long way to closing the African ‘agricultural performance deficit.’” The report goes on to advocate policy and regulation reforms claiming, “policy and regulatory barriers, including import restrictions and rigid, lengthy processes for releasing new varieties are slowing the adoption of agricultural inputs.” According to the World Bank, growth of the private sector is the best way to bring about agricultural development. Assuch, the Bank’s Doing Business (DB) project “encourages countries to compete towards more efficient regulation,” resulting in deregulation of the sector. 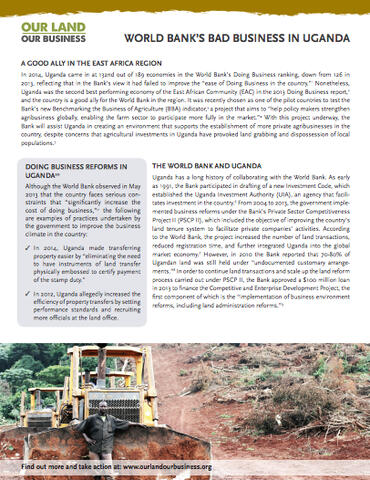 In 2014, Uganda came in at 132nd out of 189 economies in the World Bank’s Doing Business ranking, down from 126 in 2013, reflecting that in the Bank’s view it had failed to improve the “ease of Doing Business in the country.” Nonetheless, Uganda was the second best performing economy of the East African Community (EAC) in the 2013 Doing Business report, and the country is a good ally for the World Bank in the region. It was recently chosen as one of the pilot countries to test the Bank’s new Benchmarking the Business of Agriculture (BBA) indicator, a project that aims to “help policy makers strengthen agribusiness globally, enabling the farm sector to participate more fully in the market.” With this project underway, the Bank will assist Uganda in creating an environment that supports the establishment of more private agribusinesses in the country, despite concerns that agricultural investments in Uganda have provoked land grabbing and dispossession of local populations.

In 2008, the World Bank’s Doing Business program named Kenya one of its 10 Top Reformers, after the country had implemented a number of pro-business reforms. However, since then, the weakening investment climate and an “unsupportive” fiscal environment contributed to the Bank reconsidering Kenya’s inclusion in the Top Reformer group. Kenya dropped from 122nd out of 189 countries in the 2013 Doing Business ranking to 129th in the 2014 evaluation. 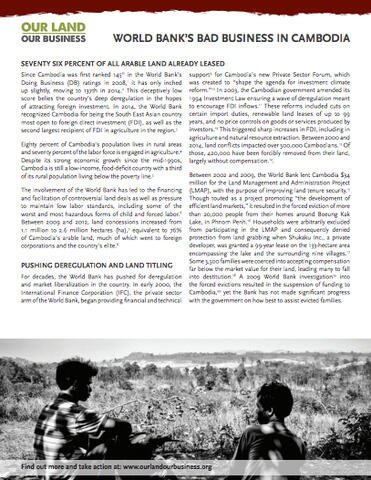 Since Cambodia was first ranked 145th in the World Bank’s Doing Business (DB) ratings in 2008, it has only inched up slightly, moving to 137th in 2014. This deceptively low score belies the country’s deep deregulation in the hopes of attracting foreign investment. In 2014, the World Bank recognized Cambodia for being the South East Asian country most open to foreign direct investment (FDI), as well as the second largest recipient of FDI in agriculture in the region. 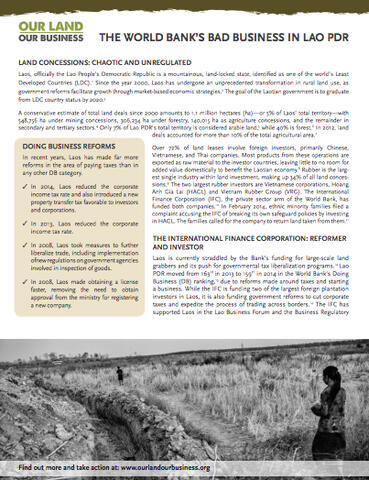 Laos, officially the Lao People’s Democratic Republic is a mountainous, land-locked state, identified as one of the world’s Least Developed Countries (LDC). Since the year 2000, Laos has undergone an unprecedented transformation in rural land use, as government reforms facilitate growth through market-based economic strategies. The goal of the Laotian government is to graduate from LDC country status by 2020. 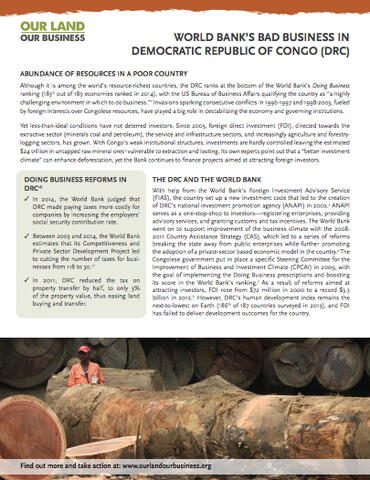 Although it is among the world’s resource-richest countries, the DRC ranks at the bottom of the World Bank’s Doing Business ranking (183rd out of 189 economies ranked in 2014), with the US Bureau of Business Affairs qualifying the country as “a highly challenging environment in which to do business.”1 Invasions sparking consecutive conflicts in 1996-1997 and 1998-2003, fueled by foreign interests over Congolese resources, have played a big role in destabilizing the economy and governing institutions. 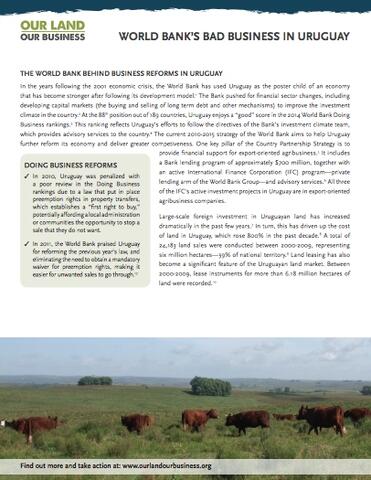 In the years following the 2001 economic crisis, the World Bank has used Uruguay as the poster child of an economy that has become stronger after following its development model. The Bank pushed for financial sector changes, including developing capital markets (the buying and selling of long term debt and other mechanisms) to improve the investment climate in the country. At the 88th position out of 189 countries, Uruguay enjoys a “good” score in the 2014 World Bank Doing Business rankings. This ranking reflects Uruguay’s efforts to follow the directives of the Bank’s investment climate team, which provides advisory services to the country. The current 2010-2015 strategy of the World Bank aims to help Uruguay further reform its economy and deliver greater competiveness. One key pillar of the Country Partnership Strategy is to provide financial support for export-oriented agribusiness. It includes a Bank lending program of approximately $700 million, together with an active International Finance Corporation (IFC) program—private lending arm of the World Bank Group—and advisory services. All three of the IFC’s active investment projects in Uruguay are in export-oriented agribusiness companies.