Following its 2016 report, which alleged that financial misreporting by foreign firms resulted in nonpayment of hundreds of millions of dollars in taxes, the  new report reveals drastic worsening of this pattern in recent years. According to the financial records, the 16 studied subsidiaries of PNG’s largest log exporter, the Malaysian Rimbunan Hijau (RH) Group, have doubled their financial losses in just six years while increasing their exports of tropical timber by over 40 percent. 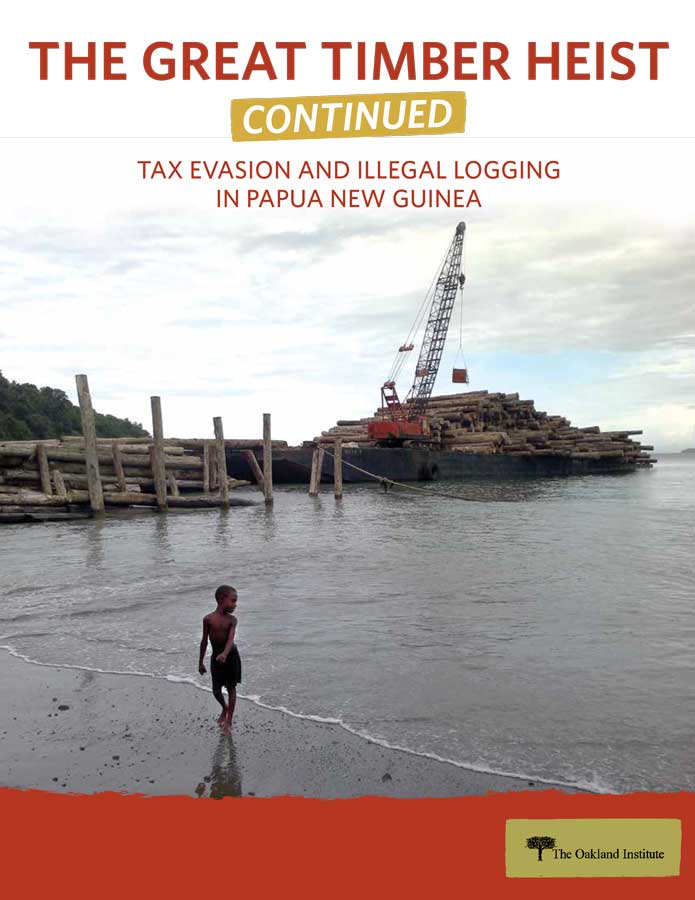 “Despite decades of operations in PNG, logging companies barely declare any profits. The official tax filings of most firms report losses year after year. How is it then possible for these companies to still remain in business if they don’t make profits? Any other business under such circumstances would have shut down by now,” said Frédéric Mousseau, Policy Director of the Oakland Institute and author of the report. “Even more puzzling is that the more Rimbunan Hijau subsidiaries harvest and export timber, the more money they declare in losses. Not only do they almost never pay any income tax, but their continued losses allow them to accumulate an astounding volume of tax credits – making it likely that they won’t pay any income tax for years to come.”

The new report also analyses the effect of the progressive tax rate on log exports introduced in 2017 by the PNG government to address concerns around tax evasion. PNG’s Minister of Forests and the forest industry have argued that this new tax has brought the industry to “the brink of disaster,” resulting in “vanishing” tax revenue for the country. However, the Oakland Institute’s latest report clearly refutes these claims showing that the tax increase has generated additional fiscal revenue while contributing to an overall drop in exports in 2017.

However, for Mousseau, “the tax reform does not appear to be enough of a deterrent to significantly affect logging operations in the country. PNG has doubled its exports of tropical timber over the past ten years and remains the world’s largest exporter. After the decline throughout much of 2017, the volume of logs exported returned to their upward trend in October. The logging industry is clearly far from the ‘disaster’ alleged by its proponents.”

The increase in log exports in recent years by PNG is largely the result of illegally-granted Special Agriculture and Business Leases (SABLs), which added 5.5 million hectares of land to the ten million hectares already under active logging concession. Despite the 2014 government’s promise that all illegal deals would be canceled, to date no decisive action has been taken to stop illegal logging or return land to the people.

“The recent tax increase may be a step in the right direction but it is not enough to curb the illegal logging operations, which continue to expand. Our hope is that this research will help the policy makers see how the logging companies continue to pull wool over their eyes so they take urgent action to end the harmful practices of the industry,” continued Mousseau.

The Great Timber Heist — Continued follows three previous reports and a film by the Oakland Institute that documented land grabbing in PNG and widespread tax evasion by a handful of Malaysian firms, including the multi-industry conglomerate Rimbunan Hijau.