April 2 – In a new land deal brief released today, Socfin Land Investment in Sierra Leone, the Oakland Institute details a pattern of coercion, lack of consultation, and failure to fairly compensate Sierra Leonean landowners who have been pressured into ceding their land to the corporate giant.

“In 2011, Socfin secured 6,500 hectares (16,000 acres) and they are running roughshod over the rights of local landowners,” said Frederic Mousseau, Oakland Institute’s policy director and author of the brief. “Bolloré Group, ranked among the top 500 companies in the world, and its subsidiaries, have gained a reputation for descending powerfully on developing countries and setting up plantations for palm oil and rubber trees. In Cambodia, Liberia, Cameroon, and Sierra Leone, the group has a reputation for leaving communities disfranchised as they acquire land cheaply through questionable processes and act with little regard for existing owners,” he continued.

In Cambodia, the World Rainforest Movement and the International Federation of Human Rights (FIDH) have documented human rights abuses and details of coercive land acquisition practices that have led to protests by the ethnic minority Bunong, who have lost their historical land and their livelihoods without fair compensation.

“The release of this new brief is very timely as–for the first time ever–landowners and land-users from all over Sierra Leone will come together in Freetown from April 2-3 to discuss and strategize about how to respond to abuses and coercion such as those related to Socfin’s operations,” said Anuradha Mittal, executive director of the Oakland Institute.

Mobilization for land rights in Sierra Leone has been gaining momentum since an October 2011 protest resulted in the arrest of nearly 40 landowners. Now this historic national assembly will address grievances and launch an effective response to corporations like Socfin. 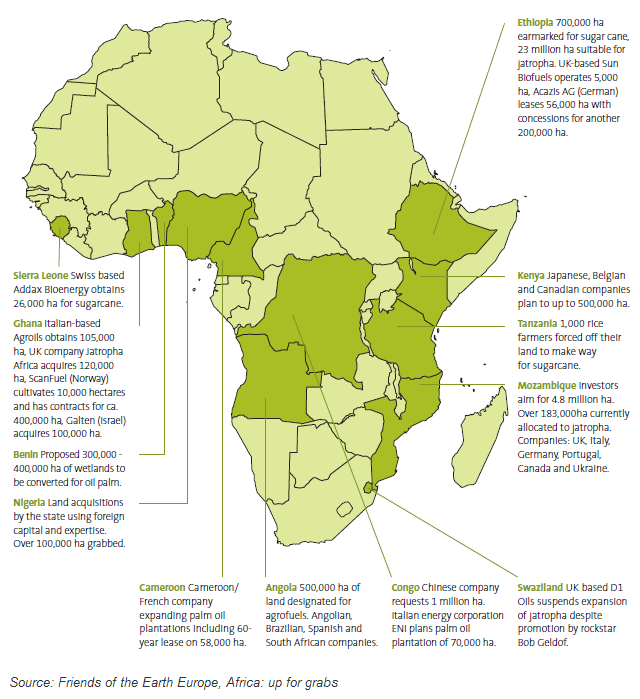 Land grab for agrofuels across Africa

“The landowners and community members in Sierra Leone are taking on a goliath. Bolloré Group is known to effectively quell protests, as seen in their dealings in Cambodia and Cameroon,” said Frederic Mousseau. Bolloré has thus far been adept at shielding the general public from details of dissent due to media ownership and the threat of lawsuits.

The latest report from the Oakland Institute offers details on the extensive holdings and growing role Bolloré Group plays in the economic structure and political life in Africa, as well as information on its business practices and human rights abuses. Bolloré Group, whose profits from plantations in Asia and Africa surged by 187% between 2009-2011, is a formidable economic force that small farmers and landowners in Africa have to contend with in the current land rush in Africa.

Earlier research published by the Oakland Institute (http://www.oaklandinstitute.org/land-deals-africa-sierra-leone) revealed that 17% of the arable land in Sierra Leone has already been leased or is about to be leased for large-scale commercial farming. All over the country, local communities and civil society are challenging the proclaimed benefits of these land deals and highlighting their devastating social and environmental impact, lack of transparency and consultation, and warn against the danger of government officials’ blind promotion of foreign land acquisitions.