New Report--Achieving Regional Integration: The Key to Success for the Fight Against Hunger in West Africa

New Report from Action Against Hunger and The Oakland Institute

If West African nations do not move decisively towards regional integration, no amount of money, development, or agricultural technology, will be sufficient or effective at ending hunger. 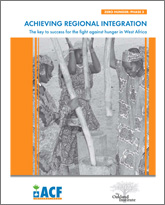 "Many issues, such as price volatility, are regional by essence and cannot be tackled effectively by individual countries. Without integration, most West African states will remain subject to the agenda and goodwill of international donors, institutions, and richer countries. Resource-poor African governments need to implement regional policies for sustainable food production, smoother regional trade, and regulated agricultural markets."

- Frederic Mousseau, Policy Director at the Oakland Institute and the author of the report

Find out about ECOWAP, the comprehensive, ground-breaking food and agriculture common policy in West Africa and how it has the potential to bring durable solutions to poverty and hunger.

Read more about what it will take to end hunger in Africa.

Achieving Regional Integration: The Key to Success for the Fight Against Hunger in West Africa was published as part of ACF's Zero Hunger project.