Miracle or Mirage? Manufacturing Hunger and Poverty in Ethiopia

Oakland, CA — As months of protest and civil unrest hurl Ethiopia into a severe political crisis, a new report from the Oakland Institute debunks the myth that the country is the new “African Lion.” Miracle or Mirage? Manufacturing Hunger and Poverty in Ethiopia exposes how authoritarian development schemes have perpetuated cycles of poverty, food insecurity, and marginalized the country’s most vulnerable citizens. 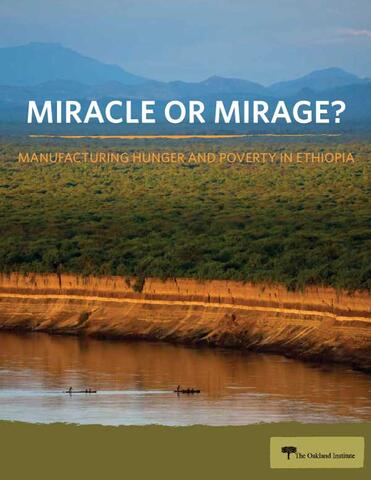 “In 2016, over 18 million people required food assistance in Ethiopia — a crisis attributed to El Niño-induced drought,” said Anuradha Mittal, Executive Director of the Oakland Institute. “This narrative, while convenient for the government and its allies, ignores the chronic food insecurity in the country — 8 to 18 million Ethiopians have depended on food or cash handouts for their survival each year over the last decade.”

While some effort was made to support smallholder farmers to increase production, the promotion of large-scale industrial farming has been the key governmental strategy to drive development.

“By 2011, the government had earmarked 3.6 million hectares for large-scale agriculture, and recently announced that over 11.5 million hectares are available to investors,” said Frederic Mousseau, author of the report. “Tens of thousands of farmers and pastoralists have been forcibly resettled through the government’s ‘villagization’ program to free up fertile lands for investors. With their traditional livelihoods destroyed, many people now rely on food aid for their survival.”

A key government objective is to make Ethiopia one of the largest sugar producers in the world. Several sugar expansion plans are underway, including the colossal Kuraz Project in the Lower Omo Valley, which will include up to five sugar factories and 150,000 hectares of sugarcane plantations that rely on Gibe III Dam for irrigation. Studies show that Gibe III could reduce the Omo River flow by as much as 70 percent, threatening the livelihoods of 200,000 Ethiopians and 300,000 Kenyans who depend on the downstream water flow for herding, fishing, and flood-recession agriculture.

Miracle or Mirage? offers lessons from the deadly impact of sugar and cotton plantations in the Awash Valley in the Afar Region, established in the 1950s. The projects drastically reduced land and water availability for people and cattle, undermined food security, destroyed key drought coping mechanisms, and stirred up violent conflicts between different groups over the remaining resources. The establishment of plantations was a critical factor in the 1972-1973 famine, resulting in the deaths of nearly 200,000 Afar people. These findings raise serious questions about the government’s logic behind sugar expansion, with $11.2 billion to be invested by 2020, and much more for irrigation schemes and dams — Gibe III alone cost Ethiopia $1.8 billion.

Using quantitative evidence, the report also details how plantations established in the Awash Valley have been far less profitable than pastoralist livestock production, while carrying massive environmental costs including the depletion of vital water resources.

“The government’s strategy for growth costs much more than the $1.5 billion it requested from donors for providing assistance to food-insecure people this year,” added Mittal. “Yet, it manufactures more hunger and poverty in the country. The anti-government protests, which threaten the country and regional political stability, are a powerful testimony that Ethiopia’s broken development model needs to be immediately overhauled.”