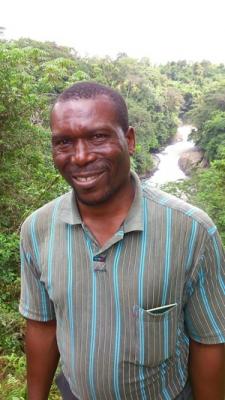 Arrested, assaulted, and then charged with libel: this is just some of what land and environmental activist Nasako Besingi has faced while helping communities from the southwest region of Cameroon stop US company Herakles Farms from grabbing their lands for the development of a 20,000 hectare palm oil plantation.

On June 19, 2014, Besingi and four other opponents of the Herakles Farms project will be in court, accused by the government of “participating in the organisation and holding of an undeclared public meeting.” The five were arrested and charged while distributing t-shirts critical of Herakles Farms in November 2012.

Besingi will face separate charges of defamation on June 24, brought against him by the US firm. Herakles Farms alleges that Besingi published “false news via the internet” when he sent out a private email detailing how he was ambushed in August 2012 by four men employed by Herakles as he was travelling on motorbike to a community affected by the company’s plantations.

Besingi filed a complaint against his assailants after the incident. But the public prosecutor, who is pursuing the two cases against Besingi, has yet to bring charges against the four men who attacked him. Besingi was recently told by the state council of the legal department, Ndian Division, that the file had “disappeared.”

“The Government of Cameroon is sending a message that the lands of its people are up for sale to foreign companies while anyone who resists will be punished,” says Ange David Baimey of GRAIN.

Both court cases have been adjourned multiple times, causing enormous stress on Besingi and the other activists and their families, and adding to the cost of legal fees.

“Despite its initial plans of taking over 73,000 ha of the world’s second largest rainforest for its oil palm plantation having been reduced to some 20,000 ha, Herakles faces strong opposition on the ground. Resorting to  intimidating local activists through frivolous law suits, adds to their long list of wrongdoings such as illegal logging, corruption, and other questionable tactics used by the New York-based firm to make the project look sustainable and beneficial to Cameroon,” says Frédéric Mousseau of the Oakland Institute.

“Herakles and the Government of Cameroon are hoping that people will tire of hearing about their intimidation of activists and communities,” says Besingi. “International attention on this company and the government’s attacks against its people is badly needed. Now.”

GRAIN, the Oakland Institute, and the World Rainforest Movement call on Herakles and the Cameroonian government to stop all forms of intimidation against critics of the Herakles Farms land deal and drop all charges against Nasako Besingi and his fellow activists. The government and the company should instead bring those who violently attacked Besingi and his fellow activists to court and engage in good faith with local communities seeking to defend their lands.

Both court cases will take place at the Court of First Instance, Mundemba, Ndian Division.