Oakland, CA — On the eve of the first anniversary of President Sirisena’s election in Sri Lanka, a new report by the International Truth and Justice Project (ITJP), Silenced, brings forward horrific new evidence of torture and sexual violence, perpetrated by Sri Lankan security forces in 2015.

This new report demonstrates that despite the change of government a year ago, serious abuses have continued to be perpetrated against the Tamil population in Sri Lanka, as evidenced by the Oakland Institute reports last year. The Long Shadow of War and We Speak Without Fear, exposed how thousands remain displaced from land in the North East, which is being used by Sri Lankan security forces to run luxury resorts and golf courses. Thousands more remain missing, with no information provided as to their whereabouts or fate. 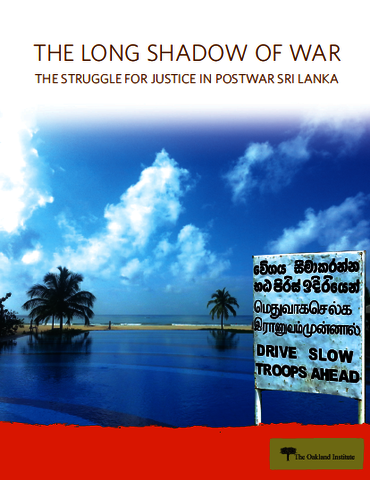 “One year ago, President Sirisena promised truth, reconciliation, and justice to the Tamil people of Sri Lanka,” said Anuradha Mittal, Executive Director of The Oakland Institute and the author of the Institute’s reports. “This new report by the ITJP demonstrates the emptiness of these promises.”

Reports by The Oakland Institute, ITJP, and others have shown that reconciliation will not be possible until the North East is demilitarized; until human rights abuses by the government’s own security forces and the culture of impunity in the country ends; and until those testifying against government forces are offered true protection.

In light of the continued violence, the ITJP report sets out steps that the Government of Sri Lanka could immediately take to investigate the cases it has exposed if it is serious about stopping torture and sexual violence. “The Oakland Institute lauds this important report from the ITJP and supports its call for security sector reform, law reform, and the establishment of an effective witness protection program,” said Mittal, “if the Sri Lankan government is serious about accountability processes in accordance with the 2015 Geneva resolution.”