Bruce Wrobel is a man with his heart in the right place. You see, Bruce is in the agricultural business and he plans to solve the world’s complex food security issues by creating sustainable, community oriented projects. He is the CEO of Herakles Farms – a corporation with some very wealthy friends.

Bruce loves Africa and he and his buddies like to get together and ponder how they could end hunger there (among other things) over games of golf. In fact, Bruce even created an NGO called All for Africa, to help do just that.

Of course, Bruce and his buddies don’t say they are in the agriculture business for the money;  instead, they would have you believe they are “addressing a dire humanitarian need." 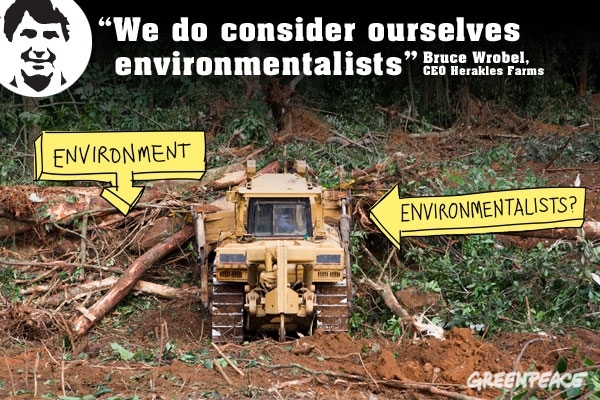 Bruce wants to grow a big palm oil plantation. And we mean BIG. This plantation would be one of the largest in Africa and out of all the land out there, he chose about 73,000 hectares between five protected areas, at the fringe of world’s second largest biodiversity hotspot.

The Herakles Farms project would displace local communities and wreak environmental havoc. This could be the reality in the South West region in Cameroon if Bruce and his buddies are not stopped.

A new report from the Oakland Institute in collaboration with Greenpeace International reveals in detail the REAL threats posed by Herakles Farms’ plans to establish a large palm oil plantations roughly eight times the size of Manhattan, through a 99-year land lease.

The huge global appetite for palm oil shows no signs of abating and has seen Africa become the latest target for investors.

Research by Greenpeace shows the extent of this investment and the dangers to the climate that large-scale industrial expansion of the palm oil sector represents if it is allowed to continue unchecked.

The opaque nature of some of these negotiations means the deals can be viewed as an aspect of these global land grabs. The Herakles case is a prime example of this.

The very legality of the convention signed by the company’s subsidiary SGSOC with the Cameroonian government in 2009 has been questioned. Herakles Farms has been repeatedly violating Cameroonian law and, as the Oakland Institute report details, has sparked widespread opposition and anger. For many residents the plantation poses a significant and direct threat to their livelihoods.

Greenpeace research on the ground in Cameroon has revealed that Herakles continues work on the plantation despite numerous legal challenges and local opposition.

Bruce Wrobel claims the project will boost the local economy and create jobs. He also claims revenues from the project will fund development projects through All for Africa. Yet there are no details on how or when such jobs will be created and there is silence on the fact that his and his company’s plantation would result in major deforestation, loss of biodiversity and the conversion of natural land and forests into a monoculture crop.

Put simply the Herakles Farms project is the wrong project, in the wrong place. Bruce and his buddies must be stopped now.

Frédéric Amiel is head of the Forest Campaign for Greenpeace France

Send Herakles Farms an email; tell Bruce and his buddies that forest destruction and dislocating communities is NOT the same thing as development.