Oakland, CA—As the Cameroonian government decides whether or not to extend Herakles Farms’ lease for a palm oil plantation this November, a new report by the Oakland Institute reveals how bullying by US government officials may have played a critical role in the initial granting of nearly 20,000 ha in 2013, instead of the cancellation of a clearly flawed project. 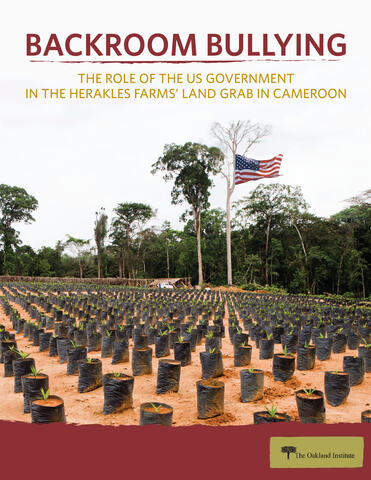 Herakles Farms made international headlines in 2012 when the company embarked on a plan to deforest over 73,000 ha of pristine rainforest to create a palm oil plantation in southwest Cameroon. As exposed by the Oakland Institute, the project was full of problems—the company violated national laws of Cameroon, ignored court orders to cease work, and moved forward despite massive opposition from local communities. Despite these serious issues, in November 2013 President Paul Biya signed a series of Presidential decrees granting the company nearly 20,000 ha of land for three years.

“It was shocking that President Biya signed the decrees despite the mountain of evidence exposing the vast social, economic, and environmental consequences of the project,” commented Frederic Mousseau, Policy Director at the Oakland Institute. “We now know that behind the scenes, US government officials were applying serious pressure to the Cameroonian government to grant Herakles Farms the land.”

Using information obtained through a Freedom of Information Act request, Backroom Bullying: The Role of the United States Government in the Herakles Farms’ Land Grab in Cameroon, reveals the bullying tactics of the US government. It also exposes the blatant contradictions between the US government’s support to Herakles Farms and US-funded projects to protect the environment, the wildlife, the forest, and to fight illegal logging in Cameroon; and that the Cameroonian government was sympathetic to and concerned about local opposition to the project, suggesting that US pressure may have been a critical factor in the decision.

“This November, the government of Cameroon will decide whether to extend Herakles Farms’ lease or end the project for good,” continued Mousseau. “By exposing the dubious tactics of the US government, we hope that Cameroonian officials will side with the people and bring an end to this project that remains unfavorable to the people and the economy of Cameroon.”