Originally published by the BBC 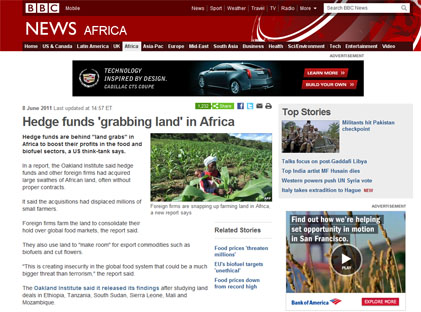 Hedge funds are behind "land grabs" in Africa to boost their profits in the food and biofuel sectors, a US think-tank says. 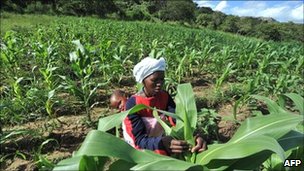 Foreign firms are snapping up farming land in Africa, a new report says

In a report, the Oakland Institute said hedge funds and other foreign firms had acquired large swathes of African land, often without proper contracts.

It said the acquisitions had displaced millions of small farmers.

Foreign firms farm the land to consolidate their hold over global food markets, the report said.

They also use land to "make room" for export commodities such as biofuels and cut flowers.

"This is creating insecurity in the global food system that could be a much bigger threat than terrorism," the report said.

It said hedge funds and other speculators had, in 2009 alone, bought or leased nearly 60m hectares of land in Africa - an area the size of France.

"The same financial firms that drove us into a global recession by inflating the real estate bubble through risky financial manoeuvres are now doing the same with the world's food supply," the report said.

It added that some firms obtained land after deals with gullible traditional leaders or corrupt government officials.

"The research exposed investors who said it is easy to make a deal - that they could usually get what they wanted in exchange for giving a poor tribal chief a bottle of Johnnie Walker [whisky]," said Anuradha Mittal, executive director of the Oakland Institute.

"When these investors promise progress and jobs to local chiefs it sounds great, but they don't deliver."

The report said the contracts also gave investors a range of incentives, from unlimited water rights to tax waivers.

"No-one should believe that these investors are there to feed starving Africans.

"These deals only lead to dollars in the pockets of corrupt leaders and foreign investors," said Obang Metho of Solidarity Movement for New Ethiopia, a non-governmental organisation in Addis Ababa.

However, not all companies named in the report accept that their motives are as suggested and they dismiss claims that their presence in Africa is harmful.

One company, EmVest Asset Management, strongly denied that it was involved in exploitative or illegal practices.

"There are no shady deals. We acquire all land in terms of legal tender," EmVest's Africa director Anthony Poorter told the BBC.

He said that in Mozambique the company's employees earned salaries 40% higher than the minimum wage.

The company was also involved in development projects such as the supply of clean water to rural communities.

"They are extremely happy with us," Mr Poorter said.

When I visited Lungi-Lol in rural Sierra Leone I saw men hoeing thousands of hectares of farmland owned by Addax, a Swiss-based bio-energy company.

They are growing sugarcane to produce biofuels.

Francis Koroma, who works on the farm, says: "We thank God for Addax. I am gainfully employed and I receive about $70 (£46) a month. Before, I spent a whole year without getting $50."

Villagers are unaware of the controversy surrounding biofuels.

Abdulai Conteh, a local traditional leader, said: "Some people are doing business here but I have no idea what they are doing with our land. I see them growing sugarcane. That's all I know."