Oakland, CA—The Unholy Alliance, Five Western Donors Shape a Pro-Corporate Agenda for African Agriculture, a new report released today by the Oakland Institute, exposes how a coalition of four donor countries and the Bill and Melinda Gates Foundation is shaping a pro-business environment in the agricultural sector of developing countries, especially in Africa. 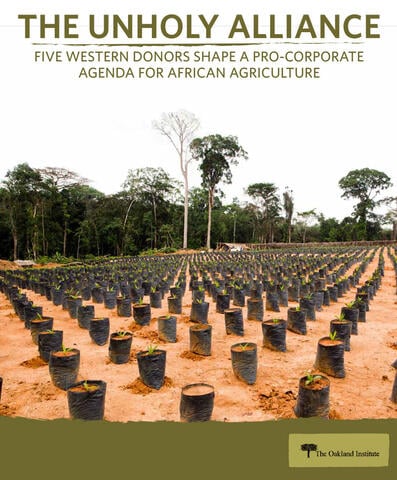 “‘Enabling Business’ has become a buzzword for development agencies, but it is vital to understand what this entails,” said Anuradha Mittal, Executive Director of the Oakland Institute. “Our research shows that, in order to foster private investments, governments are being forced to open their agricultural sector to seed, pesticide and fertilizer corporations, release land for commercial agriculture, and reduce taxes and tariffs for agribusinesses. In short, facilitate the destruction of family farming and natural resources for the sake of corporate profit.”

The Unholy Alliance comes as the G7 leaders gather at their summit in Ise-Shima, Japan, on May 26, 2016. A meeting of the G7 Agriculture Ministers preceded the grand gathering—for the first time in seven years. While this might suggest that food and agriculture is of concern to the rich nations, their track record suggests otherwise.

Instead of following through on the $20 billion commitment to support “country-owned” food security strategies, agreed upon at the 2009 L’Aquila Summit, rich nations have made an unprecedented push to favor private sector and market-driven food systems through aid programs.

The 2012 G8 initiative, the New Alliance for Food Security and Nutrition, launched in partnership with agribusinesses, aimed at increasing private investments in Africa’s agriculture. The imposition of this agenda comes with new aid conditionality. In order to receive aid through the New Alliance, African partner countries have to commit to reforms to facilitate business in agriculture. Globally, reforms are to be guided by a business ranking of countries that the G8 tasked the World Bank to put in place. The “Enabling the Business of Agriculture” (EBA) index, launched in 2013, is financed by the US, UK, Danish, and Dutch governments along with the Bill and Melinda Gates Foundation.

These five donors are rapidly expanding bilateral and multilateral ‘aid’ programs to support corporate agriculture. Through aid-funded grants, loans, or insurance mechanisms, taxpayers’ money is increasingly subsidizing agribusinesses’ activities. Promotion of hybrid and GMO seeds, pesticides, and synthetic fertilizers by such aid programs is turning Africa into a new market for agrichemical corporations. “Opening markets and creating space for multinationals to secure profits is leading to blatant land grabs across the continent, displacing farmers from their lands and imposing large-scale production structures for export,” said Mariam Mayet, director of the African Center for Biodiversity, which works to dismantle inequalities in the food and agricultural systems in Africa.

“Many farmers are marginalized by growing concentration and corporate control over seeds, land, and water and forced into poorly paid and insecure wage work. All historical and cultural connection to the land is being severed by commodification and commercialization, a result of promotion of self-interest by a few rich nations,” Mayet continued.