The Oakland Institute is proud to have sponsored the first ever assembly of communities impacted by large-scale foreign land investments in Sierra Leone. Between April 1-4, 2012, farmers, small land owners, women, youth, and elders assembled in Freetown to have their voices heard and strategize a way forward. Joan Baxter, Senior Fellow at the Oakland Institute reports from the meeting.

It was the very first opportunity for Sierra Leoneans affected by the recent wave of large land deals in the country to find their collective voice and to make it heard. Ninety farmers from all over the country — women and men, young and old — made their way to the capital Freetown to share their experiences on how large-scale foreign land investment deals are affecting them. They came from eight districts and 20 chiefdoms where foreign investors have leased vast tracks of farmland, most for 50 years with a possible extension of 21.

The occasion was the first-ever national conference of landowners and land users in Sierra Leone, an event organized by the Sierra Leonean NGO Green Scenery, together with the Sierra Leone Network on the Right to Food (SiLNoRF). The Oakland Institute provided the financial support that made the conference possible and covered travel and accommodation costs for the participants.

By the time they had finished two days of intensive discussions, the participants had developed and unanimously adopted eight recommendations that they hope will end the suffering that the land deals are causing. Every single participant endorsed the final communiqué with a signature or, for those unable to write, a thumbprint.

Green Scenery estimates that large land investment deals in Sierra Leone involve about 20 large-scale investors and cover at least one million hectares. That’s about 18 percent of the arable land in Sierra Leone. Most investments are for industrial plantations and commodities for export — sugarcane for ethanol, crude oil palm, rubber, and more recently some for large-scale production of rice.

Launching the conference, Mohamed Conteh, National Coordinator of SiLNoRF, said the question that needs to be answered is “Who benefits from the land deals?” He contended that it is not poor farmers; rather they find themselves competing with powerful foreign investors. He said that there is a need for investment in agriculture, but it must ensure food security and the right to food in Sierra Leone, not jeopardize it.

Sierra Leone is still struggling to rebuild after a long civil war, which ended ten years ago. While the country remains a net importer of food, it has been seeing improvements in its production. In 2011 agriculture, primarily smallholder farming, accounted for about 51 percent of the GDP. It employs about 3.5 million people, roughly two-thirds of the population. 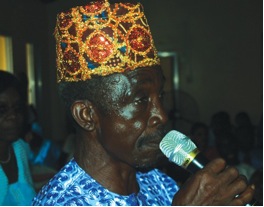 While the government of Sierra Leone says it is now supporting farmers with its smallholder commercialization program, at the same time it is promoting massive foreign direct investment in farmland in the country. It claims this will not harm smallholders or food security.

Participants at the conference strongly disagreed. The mood at the gathering was emotional and during the opening ceremony, also tense. Many participants addressed questions and passionate pleas for government action to the Deputy Director of Agriculture, Amara Sheriff, who was standing in for the Minister of Agriculture, Forestry and Food Security as keynote speaker at the opening ceremony. 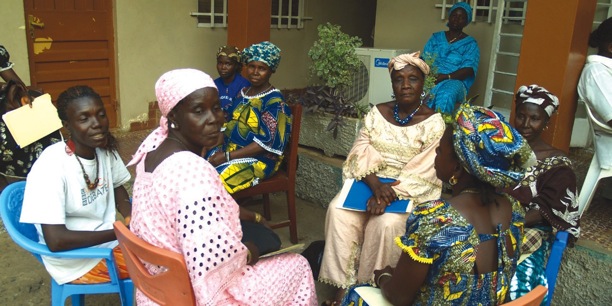 Women of Addax lease area meeting at the conference.

“How are we going to get food security if you give all the upland land to the investors? We beg you to listen to us,” said one farmer who has lost her cropland to the Swiss investor, Addax Bioenergy. “We are suffering because we have nowhere to go. You come out from war, build a house and now when you speak out, they lock you up.”

“They grab land from us and we want to get the land back,” said Sheka Musa Sam, a landowner in the Malen Chiefdom in Pujehun where Socfin Agricultural Company has leased 6,500 hectares for oil palm and rubber and also a member of parliament with the small PMDC opposition party. “There is no way we can just sit down for 50 years without getting a living. We need to come together and form a united front. We can’t let them make us slaves on our own land. This evil thing will make the poor people even poorer.”

In his response, the Deputy Director of Agriculture made some startling admissions. “We need to revisit the agreements and see whether they are favorable,” he said. “Because in this situation we need a win-win situation, both parties win, not just one.”

In his speech to the participants, Herbert M’cLeod, a close advisor to President Koroma and Coordinator of this year’s landmark Sierra Leone Conference on Development and Transformation, also surprised the audience by saying that if policies are to be put in place “to stop land-grabbing,” there is a need for a “comprehensive land use policy” in Sierra Leone.

This is the first time that government officials have publicly acknowledged that such a policy is missing and that there are problems with large land investment deals in Sierra Leone. In the past three years, the government of Sierra Leone and President Ernest Bai Koroma have been strongly promoting and praising such investment.

During the conference, participants listed more than 100 problems caused by the land deals. These ranged from the overwhelming negative impacts on women who lose their livelihoods and food production, to the effect on children’s education who have to drop out of school because their mothers can no longer pay their school fees. They spoke of increased hunger, rising food prices and despoiled water supplies. They bemoaned the devastating environmental effects of the investors’ operations. There were also concerns about the way the industrial plantations shred the social fabric of rural communities, causing marriage breakdowns, unwanted teenage pregnancies, increased incidence of sexually transmitted diseases, and even the loss of self- esteem when one loses one’s self-employment.

Participants also catalogued how, in their views, investors are bending rules, twisting arms, misrepresenting their plans, taking advantage of local customs and conniving with Paramount Chiefs and government to acquire vast tracts of farmland.

“I’m a community land user, I live from farming,” said one woman from Pujehun District. “But now the investors, this Biopalm company [SIVA Group] has come and the Paramount Chief gives all the land away, even the land I use for farming, for collecting firewood, for native herbs [medicines], for everything. Now it’s all gone. I have nothing.” Similar complaints were made about the land leases of Sierra Leone Agriculture (a lease now held by the SIVA Group), Addax Bioenergy, and Socfin.

But once they had voiced their concerns and drawn up their recommendations, the mood of the participants changed dramatically. Many expressed not desperation, but a new determination to stand up for their rights. 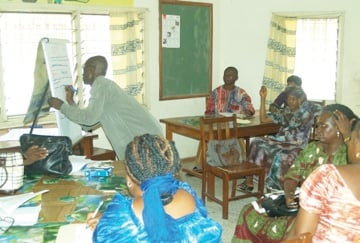 Participants listing fears, problems and benefits of the land deals.

Participants from a chiefdom where Socfin is trying to expand its lease said because of what they’d learned from each other at the conference, landowners are going to be far more cautious in their dealings with the company. “All we want is a future for our children,” said one landowner. “We need to be careful before we decide anything. We don’t want our grandchildren coming to ask us ‘why did you do this’?”

The final communiqué issued at the conclusion of this assembly, calls on government to review all the land agreements and to ensure no deals are made without full free and informed consent of and consultation with all members of the affected communities. It also states that local communities require independent legal counsel, that environmental protection must be enforced to protect land, water, vegetation and wildlife resources on which people depend. It demands that traditional rulers, particularly Paramount Chiefs, do not block consultation between communities and investors. Further, it decries any land deals that increase hunger and food insecurity. 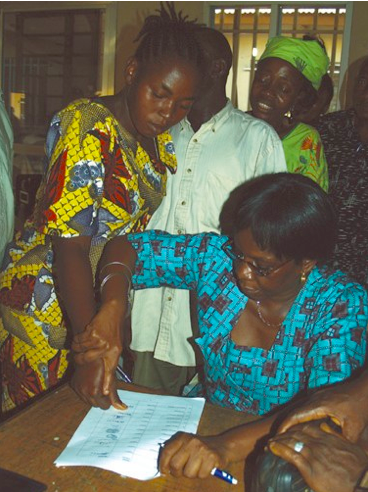 All participants, like Kadiatu Massaquoi, have endorsed the final communique.

The conference also saw the launch of a new watchdog group, Action for Large-Scale Land Acquisition Transparency, or ALLAT. The ALLAT network of civil society organizations and landowner and –user associations will monitor land investments throughout the country and sensitize communities.

The communiqué is now being passed on to the Government of Sierra Leone for consideration and — hopes Green Scenery Executive Director Joseph Rahall — strong action. He believes the conference was a very successful “first step.” He hopes that the government will listen and put a moratorium on large land deals until all the participants’ demands have been met.

Watch the video about villagers in the Malen chiefdom