Oakland, CA—With human rights as the special focus of the 26th Summit of the African Union that gets underway today in Ethiopia, the Oakland Institute and the Environmental Defender Law Center (EDLC) released a new report, Ethiopia’s Anti-Terrorism Law: A Tool to Stifle Dissent. This timely report, authored by lawyers from leading international law firms, provides an in-depth and damning analysis of Ethiopia’s Anti-Terrorism Proclamation. Building on the substantial number of earlier legal analyses prepared by a wide range of critics of the law, the report examines how the law, enacted in 2009, is a tool of repression, designed and used by the Ethiopian Government to silence its critics.

“While legitimate anti-terrorism laws exist, Ethiopia’s Anti-Terrorism Proclamation criminalizes basic human rights, especially freedom of speech and assembly. The law defines terrorism in an extremely broad and vague way so as to give the government enormous leeway to punish words and acts that would be perfectly legal in a democracy,” said Lewis Gordon, editor of the report and Executive Director of the Environmental Defender Law Center. “It also gives the police and security services unprecedented new powers, and shifts the burden of proof to the accused. Worse still, many of those charged report having been tortured, and the so-called confessions that have been obtained as a result have been used against them at trial,” he continued. 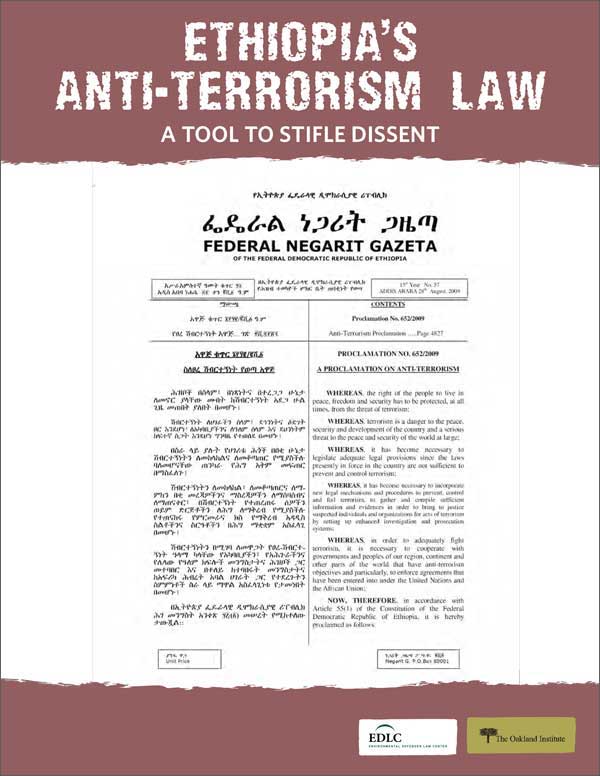 “Through our extensive work on land related issues in Ethiopia, we have witnessed firsthand how the anti-terrorism law has been misused to curb peoples’ opposition to forced land evictions and land grabbing by domestic and foreign investors,” said Anuradha Mittal, Executive Director of The Oakland Institute. “We are grateful to the legal community for providing this essential analysis of the dire situation in Ethiopia. It is time for the international community and donor countries to demand that this law, used to oppress and intimidate political speech and freedom is struck down immediately,” Mittal continued.

“The conclusions reached in this report are not those of a few fringe lawyers or policy organizations,” said Lewis Gordon. “This law has been harshly criticized by the UN Commissioner for Human Rights, numerous UN Special Rapporteurs, the African Commission on Human and People’s Rights, the governments of the US and UK, and the EU. Given our findings, we must, as an international community, demand that until such time as Ethiopia revises this law to bring it into conformity with international standards, it repeal or suspend the use of this repressive piece of legislation.”

Those who have been charged as terrorists under the law include newspaper editors, indigenous leaders, land rights activists, bloggers, political opposition members, and students

About the report’s authors & contributor:

Lewis Gordon, Editor & Author: A Harvard graduate, Mr. Gordon has been a lawyer for over 35 years and is the Executive Director of the Environmental Defender Law Center (EDLC). Mr. Gordon has worked on numerous high-profile environmental and human rights cases on behalf of thousands of victims, as well as a host of international prize-winning activists, in dozens of countries around the world.

Sean Sullivan, Author: J.D., University of Southern California. Mr. Sullivan is a lawyer at the Los Angeles office of Davis Wright Tremaine, LLP, and focuses his practice on intellectual property and complex class action litigation. He has assisted EDLC on a number of projects in the past, including obtaining freedom for an international prize-winning Mexican activist wrongfully charged with murder, and obtaining political asylum for another imprisoned Mexican activist who had received an international prize delivered to him in his jail cell by the widow of the late Senator Robert F. Kennedy.