Africa's fourth-largest lake could drop by 20 metres, causing an ecological and human disaster to rival the shrinking of the Aral Sea in central Asia, if Ethiopia goes ahead with massive irrigation projects linked to a giant dam,according to a university paper.

Lake Turkana, located almost entirely in Kenya but fed by the river Omo, which rises in Ethiopia, will be severely impacted by the 243 metre-high Gibe III dam, which is due to be completed this year, says the study, published by the University of Oxford's African Studies Centre. It suggests water levels could drop by half, devastating the lake's fisheries and affecting the livelihoods of 170,000 agro-pastoralists.

"Ultimately, the 6,400 sq km lake could reduce to two small lakes. The picture that emerges from these predictions bears a striking resemblance to the recent disastrous history of the Aral Sea, which was once the world's fourth-largest inland water body," said Sean Avery, a Nairobi-based hydrologist who studied the impact of the dam project for the African Development Bank. 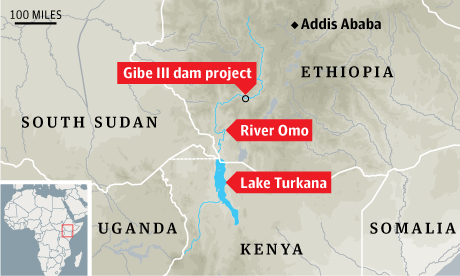 The Aral Sea, which is shared between Uzbekistan and Kazakhstan, lost nearly 75% of its water in 30 years when vast amounts were abstracted by Soviet farmers from its feeder rivers to grow cotton. The result has been the collapse of the fishing industry, ill-health, climate change across the region, and severe dust storms.

"The parallels [of the Aral Sea] with what might happen to the people and environment of Lake Turkana and a large part of northern Kenya are clear. On top of this, no feasibility studies or social and environmental impact assessments in the Lower Omo have yet been published," Avery said.

The Ethiopian government claims that the $2bn (£1.2bn) dam, which is intended to generate electricity for Kenya, Ethiopia, Djibouti and Somalia, will stop annual flooding of the Omo valley. But Avery argues that major problems will occur when 450,000 hectares of irrigated sugar farming starts downstream of the dam. "This will require a huge water abstraction from the Omo," he said.

According to Avery, the water needed to fill the reservoir of the Gibe III dam will equal one year's inflow into Lake Turkana. "The lake level will fall up to two metres during reservoir filling, which is expected to take up to three years. The fall will be temporary, however, since the lake level will be substantially restored after another 16 years or so," he said.

"The picture changes dramatically, however, when the potential effects of large-scale irrigation for industrial-scale sugar and biofuel plantations are considered. The land area allocated for commercial agricultural development is over 455,500 hectares, but the ultimate water requirement is unknown at present. One scheme for which water needs are known and which is now being implemented by the Ethiopian Sugar Corporation will equal in extent the entire irrigated area of Kenya – approximately 170,000 hectares."

The effect on the lake's fisheries could be devastating, said Avery. "The ecological and human impacts of the irrigation schemes have barely been considered. No feasibility studies or social and environmental impact assessments for irrigation development in the Lower Omo have yet been published," he added.

The Ethiopian government claims 150,000 jobs will be created by the plantations but human rights groups, including Survival International and the Oakland Institute, say thousands of people are being evicted to make way for the irrigated plantations.

"The abuses being carried out by the Ethiopian government in the Lower Omo are incontrovertible," said David Turton, an Oxford University anthropologist who has spent 40 years working in the Lower Omo valley. "Thousands of agro-pastoralists are being evicted by government [decree] from their most valuable agricultural land along the banks of the Omo to make way for government-owned irrigated sugar plantations. The evictions are being accompanied by a resettlement or 'villagisation' programme which, although described as 'voluntary', is forced in the sense that those affected have no reasonable alternative but to comply.

"No impact assessments, feasibility studies or resettlement plans have been made available for public scrutiny and discussion. No plans have been announced for compensation, benefit sharing or livelihood reconstruction. And no attempt has been made to give the affected people a say in decision making," he said.

The region's top human rights body, the African Commission on Human and People's Rights, has written to the Ethiopian government asking it to stop the forced resettlement of the Lower Omo tribes while it investigates the allegations.

Officials from the UK's Department for International Development (DfID) and the US Agency for International Development (USAid), which together gave more than $800m in development aid to Ethiopia in 2011, visited the valley in January 2012, but both agencies said they had found no evidence of human rights abuses. Last month, however, the US Congress stopped any American development aid being used to fund forced evictions of tribal people in the area.

DfID denies British money is used for the evictions but Britain is the biggest contributor to the World Bank's promoting basic services programme, funds from which provide budget support for Ethiopian local government. Resettlement in the Lower Omo is the responsibility of the local administration. "It would be stretching credulity beyond reasonable bounds to believe DfID's claim that no UK money is being used to finance [the evictions]," Turton said.

A DfID spokesman said, "Our aid to the government is only used to provide healthcare, schooling, clean water and other services. The UK has never funded the Government of Ethiopia's Commune Development or other resettlement programmes and it is wrong to suggest that British development money is used to force people from their homes."

"The Ethiopian government has not consulted any indigenous communities over its aggressive plantation plans in the Omo Valley, and very few were consulted over the construction of the Gibe III dam", said Stephen Cory, director of Survival International. "It is high time that British parliamentarians follow suit and ensure that DfID does not use UK taxpayers' money to fund human rights violations in the Lower Omo."

Berhanu Kebede, Ethiopian ambassador in London, strongly refuted the University of Oxford study. "The dam will store additional water to what is currently present in the system – water that hitherto would have been wasted – and will permit the rational management of this water in the basin," he said.

"Lake Turkana will not lose a considerable amount of water, as claimed, and Kenya will benefit from low-cost electricity to its growing economy, to the tune of 400 megawatts, in the not-too-distant future."