Oakland, CA — The Return of Erik Prince: Trump’s Knight in America’s New Crusade? a new brief from the Oakland Institute, exposes the comeback of the founder of Blackwater, the notorious private security company. An ardent detractor of Obama/Clinton foreign policy during the presidential campaign, Prince is now set with access to unique assets, to be a key player in Trump’s foreign policy.

“According to our findings, Prince’s connections range from top Emirati businessmen to Abu Dhabi’s Crown Prince Court,” said Anuradha Mittal, Executive Director of the Oakland Institute. “The first investor in the Frontier Resources Group was a company linked to Sheikh Tahnoon bin Zayed Al Nahyan, the brother of Abu Dhabi’s ruler itself,” she added. 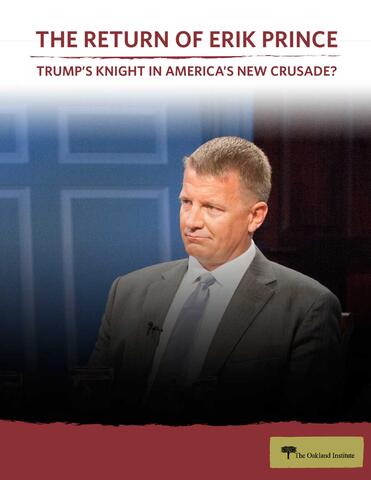 The UAE is a country where both Trump and Prince have business interests and unsurprisingly was not included among seven predominantly Muslim nations impacted by Trump’s travel ban. The UAE is also a key US ally in the wars that are raging in the Muslim world. It is a member of the US-backed coalition against Houthis rebels in Yemen and is willing to send troops to Syria as part of a US-led coalition against ISIS. In Libya, it is backing the anti-Islamist and Russia-favored General Haftar, reportedly with the support of American pilots employed by Prince.

“The brief reveals the opportunities for Prince to operate once again as a private security contractor – this time for the Trump administration,” added Mittal. “His company, FSG, in addition to experience in securing oil fields in conflict areas, has a staff roster packed with former militaries and mercenaries, including from Blackwater and Executive Outcomes, enabling quick mutation from logistics provider to a war contractor.”

With such assets, Prince is in a prime position to support Trump’s vowed effort to destroy ISIS and get the US hands on its oil reserves. In addition, Prince has connections at the highest level of the Trump administration. His sister Betsy DeVos is Trump’s pick for Secretary of Education, and Prince supported the career of Vice President Mike Pence along with other prominent advisors to Trump.

Dignity or Exploitation? What Future for Farmworker Families in the US ft. David Bacon