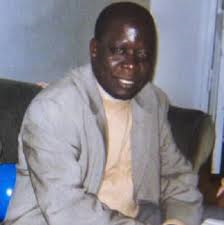 Congressman Keith Ellison is gathering support from his fellow Representatives to sign a letter urging President Obama to help use his influence to free Okello Akway Ochalla.

To support this effort, please reach out to your member of congress to ask him or her to sign the letter. To find your representative, go to the House website and enter your zip code:

Please join me in sending the following letter to President Obama, asking him to help secure the release of Mr. Okello Akway Ochalla, a political prisoner arrested for his vocal opposition to human rights violations in Ethiopia.

Last year, Mr. Okello, an indigenous leader and a former regional Governor, was kidnapped by Ethiopian Security Forces. Because of his political activism and open criticism of the Ethiopian government, Mr. Okello was tried on false charges.

Ethiopia has been an important ally of the United States for many years. However, recent actions of the Ethiopian Government are leading to serious instability in the country, especially the ongoing arrests of journalists, bloggers, students, and political opposition leaders.

I hope you will join me in asking President Obama to urge the Ethiopian government to release Mr. Okello and others who are being wrongfully held for their opposition to human rights violations. If you are interested in cosigning the letter below, please contact Sara Sudetic at [email protected] by COB March 3, 2016.

We write to ask you to help secure the release of Mr. Okello Akway Ochalla from captivity in Ethiopia. Mr. Okello is an indigenous Anuak leader and the former Governor of the Gambella region in Ethiopia. His children and sister-in-law reside lawfully in the U.S. He has been a political prisoner in Ethiopia for nearly two years.

The United States is home to a large Ethiopian diaspora. Many Ethiopian Americans are alarmed by the ongoing human rights abuses in their country of origin. There is particular concern regarding the silencing of political opposition members. Mr. Okello is one of these political opponents who has been unjustly silenced and imprisoned.

Mr. Okello’s charge is based on his vocal opposition to the Ethiopian government, particularly for its role in the massacre of Anuak people in the Gambella region in December 2003. An ethnic Anuak himself, Mr. Okello fled the country and was eventually granted asylum in Norway. Because of his political leadership and open criticism of the Ethiopian government, Mr. Okello is being branded a terrorist and tried on false charges.

In March 2014, Mr. Okello was visiting friends and family in South Sudan when he was kidnapped by the Ethiopian Intelligence Service, unlawfully renditioned to Ethiopia, and imprisoned and charged under Ethiopia’s notorious anti-terrorism law[1]. This law has been condemned by numerous governments including our own, agencies of the United Nations agencies, and most recently in a detailed report written by leading international lawyers, which we are attaching for your information. We believe that Mr. Okello has been subject to torture while in prison.

Prior to your visit to Ethiopia in July 2015, the Ethiopian government released a number of political prisoners and journalists, including Mr. Bekele Gerba, the leader of a political opposition party representing the Oromo people in Ethiopia. There is clear precedent for the U.S. to use its diplomatic relationship to ensure the release of political prisoners in Ethiopia, and we request you to do the same for Mr. Okello. It has been nearly two years since Mr. Okello was unlawfully renditioned to Ethiopia. Mr. President, as the leader of one of Ethiopia’s most significant allies, we urge you to intervene to ensure the swift release of Mr. Okello Akway Ochalla.

Thank you for your commitment and attention to this important human rights matter.