Oakland, CA — As the One Climate Summit begins in Paris, the Oakland Institute's new report, Carbon Colonialism: Failure of Green Resources’ Carbon Offset Project in Uganda, lays bare the false solutions to climate change promoted by Western corporations and institutions in Africa. This scathing exposé reveals how Green Resources, a Norwegian industrial forestry and carbon offset project, continues to undermine food security and livelihoods by excluding people from their own land in Kachung, Uganda. The project, supported by a number of international financial institutions, illustrates how climate change is increasingly misused as a pretext to impose a new form of colonialism in Africa.

Following the Institute’s exposé in 2014, revealing the mistreatment and violence perpetrated by the company in Uganda, Green Resources’ only carbon credit buyer, the Swedish Energy Agency, suspended funding in 2015 and outlined ten actions for the company to undertake to reinstate payments. The following year, Green Resources’ major shareholder, global forestry investment firm Phaunos Timber Fund, divested from the company. 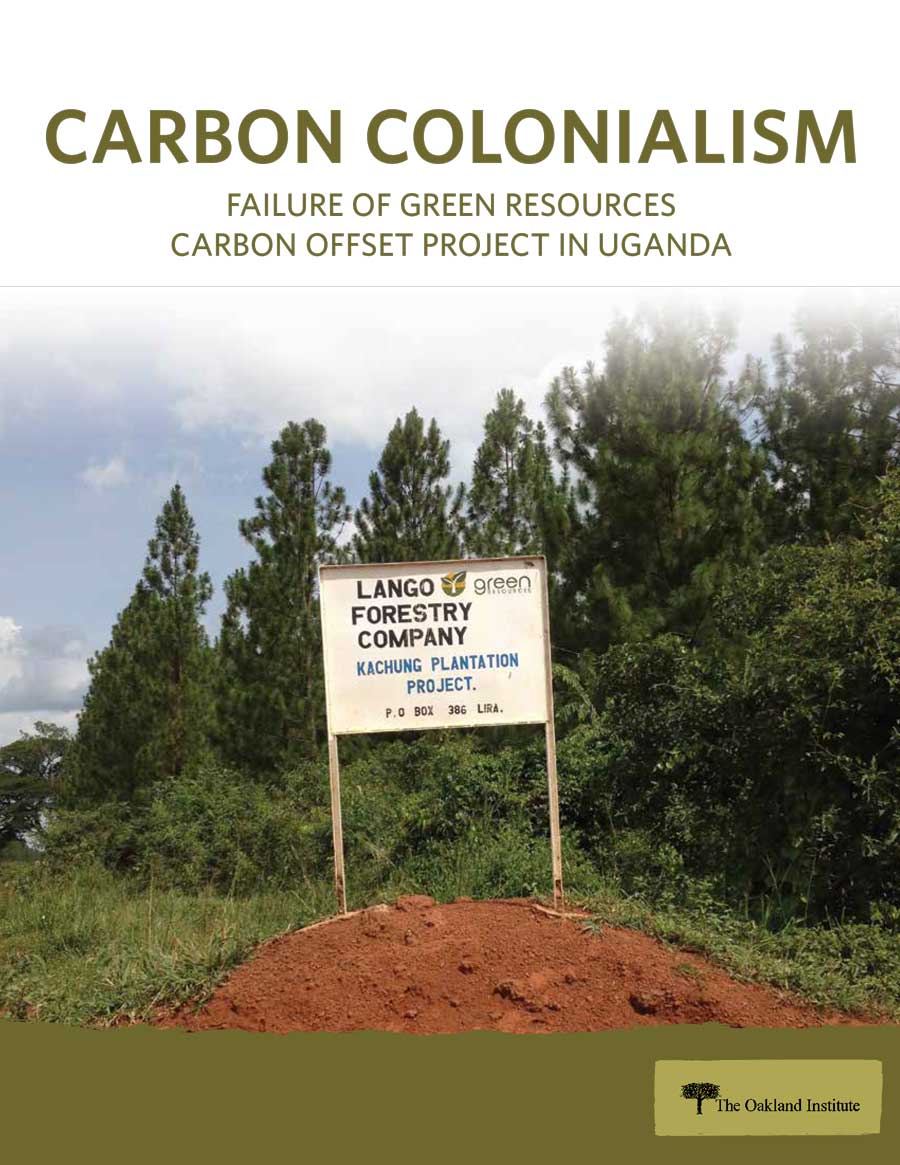 As the Swedish Energy Agency reassesses whether to resume payments to Green Resources in early 2018, Carbon Colonialism is an irrefutable indictment on the failure of Green Resources to address the harmful impacts on local communities as a result of its project.

“Our field research reveals that communities surrounding the plantation face an on-going hunger crisis resulting from restrictions placed by the project on access to land, water, firewood, along with perilous working conditions for Green Resources’ workers,” explained Kristen Lyons, lead author of the report and Senior Fellow at the Oakland Institute. “It is simply unacceptable that a Norwegian company seeks to extract a profit in the face of such dire conditions,” she continued.

The firsthand accounts presented in the report debunk recent audits of Green Resources that present the company as being compliant in most areas of reform demanded by the Swedish Energy Agency. Such audit findings are difficult to reconcile with Green Resources disregard for the desperate conditions local communities face.

“Green Resources continues to misrepresent their negative impact in the region,” commented David Ssemwogerere, co-author of the report. “They champion the meager impacts that they’ve had, while downplaying the fact that their project is threatening the very survival and livelihoods of villagers.”

“The industrial monoculture plantation forestry run by Green Resources at its Kachung site is incompatible with the needs of local people who rely upon the same land for their livelihoods and existence,” stated Frédéric Mousseau, Policy Director at the Oakland Institute. “In the wake of our latest findings, it is imperative that the Swedish Energy Agency suspend all future payments to Green Resources and cancel the deal for purchase of carbon credits. This is the only viable response in the face of the worsening impact of Green Resources on the livelihoods of local villagers in Uganda.”