Almost 56 years ago, Martin Luther King Jr. said these words at the conclusion of the Selma to Montgomery March.

This January 18th — MLK Day — we stare into the face of this brutality again.

America reels from violent insurrection led by a mostly white mob at the behest of a president, while readying itself for more in the comings days. Core values and basic principles of equity, democracy, decency, and freedom came under attack.

Donald Trump is responsible for this. And his enablers who have normalized a new breed of white nationalism with open intolerance toward every group seen as “the other.”

Martin Luther King Jr. set an example, and we know what he would do today. He would hold elected officials accountable and urge all to join non-violent movements for equity and justice. He would remind us not to forget that as the white mobs attempted to desecrate our democracy, record voter turnout in the state of Georgia — driven by Black voters — elected the first Black and first Jewish Senators. Historically disenfranchised Black and Brown voters have been pivotal in essentially all of the recent major elections in the United States of America.

Elevating the voice of resistance and joining the struggle for equity is key for social change!

The foundation of our work is to dismantle power structures and ideologies that prop up inequity, allow theft of lives and livelihoods — through corruption and collusion — both at home and abroad. To win the struggle for social, economic, and environmental justice, white supremacy and institutionalized racism has to be dismantled.

This is why we stand together with land defenders rising up against racist neo-colonialism and theft of their land and life.

On January 14th, 2018, Representative John Lewis reminded the nation, “we're one people, we're one family, we all live in the same house. Not just American house, the world house…” This is the vision that drives our work this MLK day — January 18th, 2021. 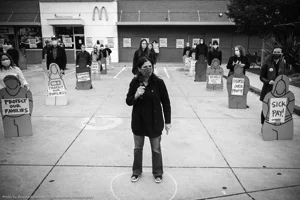 The Great Carbon Boondoggle: Inside the Struggle to Stop Summit’s CO2 Pipeline

The Great Carbon Boondoggle: Inside the Struggle to Stop Summit’s CO2 Pipeline