Released on July 22, 2013, the World Bank’s report, Securing Africa’s Land for Shared Prosperity, provides a ten-step program to “boost governance,” “step up comprehensive policy reforms,” and “accelerate shared and sustained growth for poverty reduction” in sub-Saharan Africa. [1] At first glance, these ambitious objectives, aimed at addressing the ongoing crisis of land grabbing on the African continent seem promising; however, the report’s substance fails to deliver. 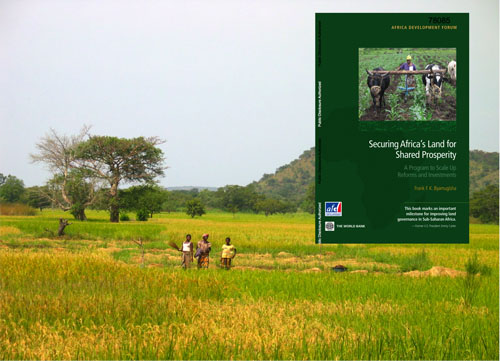 Departing from the paradox that although Africa is endowed with vast natural resources yet the continent remains very poor, Franck Byamugisha, the author of the report, identifies “poor land governance” in African countries as the root of the problem. Land governance, according to Byamugisha, refers to “the manner in which land rights are defined and administered.” Thus, the report outlines a program aimed at “scaling-up land administration” in sub-Saharan Africa. Hiding behind this ambiguous goal, the prescribed program is nothing more than World Bank’s old paradigm of enhancing efficiency by “transferring land from less to more productive users at low cost.”

The report rekindles the assumptions that land registration would somehow give farmers access to low-cost credit to invest in their parcels, improve their yields, and that Africa has abundant “surplus land” which should be delineated and identified in order to be acquired by land developers. (In its 2012 report Our Land, Our Lives, Oxfam debunked the myth of Africa’s “unused land,” showing that most areas targeted by land deals were previously used for small-scale farming, grazing and common resources exploitation by local communities. [2]) Not only are these postulations yet to be proven, but they also assume that customary rights and traditional landownership are part of an underefficient system that needs transformation. The report’s recommendations thus include proposals such as “demarcating boundaries and registering communal rights,” “organizing and formalizing communal groups,” and “removing restrictions on land rental markets.”

“An important challenge to policy makers,” adds Byamugisha, “is to balance landowners’ rights with the necessity and capacity of the government to regulate land use in the best interests of society.” Hence, significant pressure remains on African governments to enable foreign investors’ entry in the Continent. The report advocates improving mapping, registration, and efficiency of land administration services and management of expropriations in order to reduce transaction costs of parcel acquisition in Africa.

Previous reports by the Oakland Institute exposed the role played by the World Bank Group in facilitating land grabbing. [3] (GRAIN’s 2012 report Who is behind the Land Grabs? can also be consulted on this issue. [4]) The World Bank’s new report shows that the emperor has no new clothes. Despite the introduction of a new politically correct vocabulary and some shallow proclamations around “land vulnerability” in Africa, the World Bank remains an accomplice in global land grabs.

* Alice Martin-Prevel is a 2013 Intern Scholar at the Oakland Institute.

[3] S. Daniel and A. Mittal, (Mis)Investment in Agriculture: The Role of the International Finance Corporation in Global Land Grabs, Oakland Institute, 2010.

[4] Who’s Behind the Land Grabs? A Look at Some of the People Pursuing or Supporting Large Farmland Grabs around the World, GRAIN, 2012.