What is the Future We Envision for America?

According to House Majority Leader Eric Cantor (R-VA), Washington should care for the generations ahead. [1] Yet, his recent austerity measure undermines investment in America’s future. If the $40 billion cut to the existing Supplemental Nutrition Assistance Program (SNAP) in the House of Representatives should pass in the Senate, the government will have failed the nation’s poor. [2] By slashing the budget of the very program that prevents millions from sinking into poverty during a time of rapidly widening income disparity, this policy calls into question the role of the government. SNAP should focus on the destitute, not the dollars.

The bill narrowly passed, with Congressmen voting 217-210 along party lines. The Republicans argued that the food stamp program is an excessive government expenditure, fueling “government dependency” and contributing to a growing welfare or “nanny” state. At close to $80 billion a year, the SNAP program has been criticized for creating a so-called culture of idleness. House Republicans argue that by eliminating categorical eligibility and instating work requirements, also called “workfare,” the SNAP recipients will be motivated to find gainful employment. [3]

The underlying assumption is that SNAP recipients primarily consist of unemployed adults who live in areas where jobs are easily found. Moreover, it is assumed that these jobs would offer wages that could afford basic necessities, such as housing, child care, and food, thereby eliminating the need for government assistance. “Laziness” or “unwillingness to work” is, thus, the only explanation for SNAP enrollment in this paradigm.

This logic does not stand up to the available data. First, SNAP primarily serves participants with special needs who cannot work, including children, the elderly, and the disabled. Children alone account for 47% of SNAP recipients. Households with children receive 71% of all SNAP benefits. Of those who can work, many participants are or have been part of the labor force: 30% have job earnings, 21% are on Social Security, and 6% receive unemployment insurance. [4] 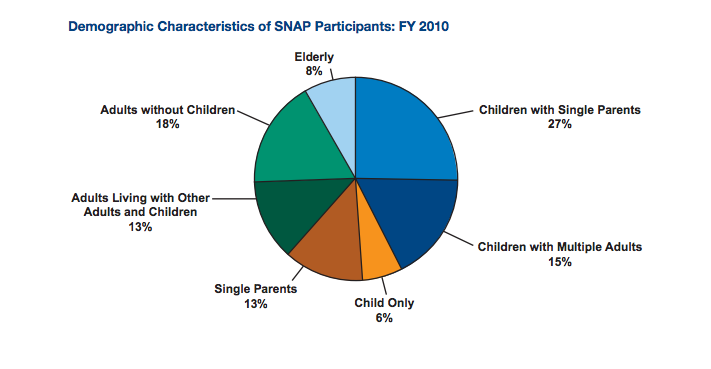 Secondly, according to the Department of Labor, an average of 184,000 jobs per month were created this past year. However, this figure hovers below the creation of 200,000 jobs per month necessary to account for population growth. While the unemployment rate dropped in August 2013, a large portion of that decline resulted from people ceasing their job search and dropping out of the labor force. Furthermore, of the jobs being created, a significant percentage was in the low-wage sector, such as fast-food or retail. [5] The problems are twofold: one, many people searching for jobs cannot find any; and two, for those who are hired, many of these jobs fail to provide adequate wages. The mounting inadequacy of low-wage jobs to support workers recently culminated in worker-initiated strikes in fast-food and retail establishments in close to 60 cities across the nation. 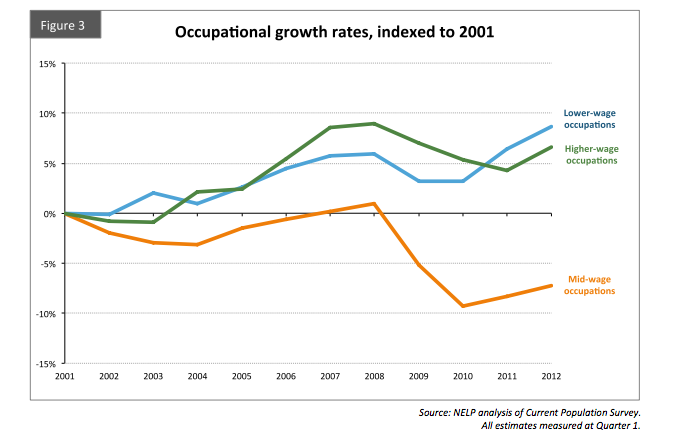 The scope of financial hardship caused by unemployment and underemployment and low wages is evident in the number of people who live at or under the poverty line—47 million, or one in seven Americans. [6] As a result of the impoverished economic landscape, 49 million people were food insecure last year. Despite the growing number of jobs, this number has not improved since 2011. [7]

SNAP participation reduced food insecurity in American households by 5 to 10 percentage points in 2012. [8] SNAP ensures that poor working class parents, their children, the elderly, and the disabled can worry a little less about how they will obtain their next meal. The growing number of SNAP recipients (up by one million since last year to 47 million recipients in June 2013) underscores SNAP’s crucial role in combating growing hunger. [9] While this surge illustrates SNAP's swift and effective response to the recession, this increase is only temporary. SNAP expenditure as a portion of GDP will fall as the economy recovers. Since SNAP isn't growing more quickly than the economy in the long run, it will not contribute to the country's long-term fiscal problems. [10] The large numbers enrolled in food stamps reflect a real need for government assistance. That number will naturally fall as employment increases. The Republicans are making a grave mistake by slashing the budget when SNAP's relevance is all too important today.

America stands for the equality of opportunity. However, when the Republicans succeed in passing a bill that cuts $4 billion from SNAP every year for the next ten years and reduces the number of recipients by 3.8 million individuals in 2014 and by 14 million by 2023 [11], how is America fulfilling this promise? In the absence of jobs that will pay workers a fair wage, millions of households on the brink of starvation will have nobody to turn to for help. This future dooms these families to a life of struggling impoverishment. The purpose of SNAP is to aid Americans, not balance the budget. America can do better. It’s time for her to rethink her policies.

* Peiley Lau is a 2013 Intern Scholar at the Oakland Institute.