On June 11, 2013, fired workers and their supporters participated in a 72-hour hunger strike in San Jose and Oakland, California. This “Fast Against the Firings” drew attention to the insidious effects of the Immigration and Customs Enforcement (ICE) department’s continued policies requiring local employers to fire workers who do not have proper immigration papers. Fasters and community members held signs reading “Trabajar No Es Un Crimen!” (Work is Not a Crime) and condemned S.744’s proposal for a mandatory e-verify program as part of the immigration reform legislation. According to Reverend Deborah Lee, a faster and the Director of the Interfaith Coalition for Immigrant Rights, more than 50 people participated in the fast. 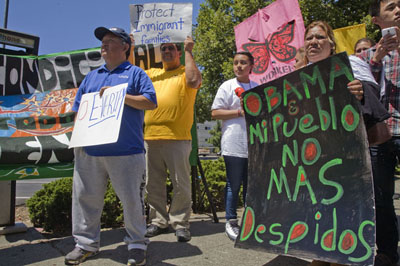 San Francisco Bay Area employers including Mi Pueblo Food Center, Pacific Steel, Waste Management, AMB, DoBake, and Joseph Albanese Construction have recently fired hundreds of workers. As Oakland Institute Senior Fellow and faster David Bacon put it, “there is no common sense in firing workers while Congress debates the bill.” [1] Regardless of whether S.744 is made into law, these workers will not be rehired by their former employers, and fasters believe that the firings strip individuals of their basic human right to work and will catapult affected communities into the margins of poverty and fear.

According to Rev. Lee, Bay Area firings have increased dramatically and enforcement has stepped up this year, but little to no media attention has been given to the issue. The fast was an effort to support fired workers, as well as a tool to engage policy makers. Oakland Mayor Jean Quan has already agreed to send a letter to Homeland Security Secretary Janet Napolitano urging ICE to stop these firings.

Silent Raids: I-9 Audits, E-Verify, and Threats to Labor

Many call the firings “silent raids,” in which ICE implements I-9 audits of an employer’s hiring records to determine whether employees are authorized to work. Unlike President Bush’s sensational ICE raids that rounded up many undocumented workers at once, Obama’s ICE approach has shifted the immigration enforcement burden onto employers and transitioned to low-profile firings. Although it is more hushed, Obama’s I-9 audit strategy is even more effective: in fiscal year 2012, ICE enforced 3,764 audit-raids, which led to mass firings nationally. [2] Yet, even though the sanctions theoretically punish employers for hiring undocumented workers, fines are seldom enforced. As a result, undocumented workers bear the brunt of immigration enforcement.

But it doesn’t stop with I-9 audits: the e-verify program is another notch in ICE’s enforcement belt. E-verify is a voluntary program in which participating employers electronically check a new hire’s social security number with a government database to determine whether s/he is legally authorized to work. Bill S. 744 plans to make e-verify mandatory for all employers in the US, despite concerns that the e-verify program is too inaccurate, too costly, would reject immigrants who cannot qualify for legal status, and could lead to rampant misuse by unscrupulous employers. “The fundamental flaw with e-verify is that they enlist employers to do the enforcement,” says Rev. Lee.

The I-9 audits and e-verify programs have already been mangled in Bay Area labor disputes. Employers have been able to use the threat of immigration enforcement to frighten workers from organizing or speaking up about bad working conditions. In December 2012, landfill and clerical workers at Oakland’s Waste Management were planning to go on strike to negotiate wage increases and working conditions. Waste Management—in order the thwart the strike—called the workers’ union in for some “negotiating” meetings.  Yet, that very same day, Waste Management also notified four veteran employees (and strike supporters) that they failed the e-verify test. [3] In what appears to be a shameless act of retaliation, Waste Management allegedly misused the e-verify system designed only to verify new hires in order to fire undocumented strike supporters. The company denies any connection between e-verify participation and retaliations against employees’ right to organize.

While ICE is not supposed to use immigration enforcement during labor disputes, its record is murky at best. National Immigration Law Center attorney Emily Tulli notes, “. . . unscrupulous employers can use the threat of immigration enforcement as a tool to ensure worker compliance, no matter the wages paid or working conditions imposed.” [4] Alleged e-verify retaliation had also occurred at Bay Area Mi Pueblo supermarkets, a company with a grim history of labor abuses. Mi Pueblo claims that it was under an I-9 audit while workers were trying to organize into a union in 2012 and started using e-verify in February 2013, which led to mass firings. The sad irony is Mi Pueblo Market CEO Juvenal Chavez is now unleashing brutal retaliation against the undocumented, even though he himself came to the US undocumented in 1984.

The immigration reform bill S. 744 intends to provide a path to citizenship for up to 11 million immigrants currently living in the United States. It will also eventually require all employers in the US to use e-verify, a provision that the fasters oppose and that could affect millions. Rev. Lee argues that many immigrants will not quality for provisional status and demands that the legalization program be more practical and inclusive. Currently, S.744 has unrealistic income and continuous employment requirements for immigrants: the bill requires that immigrants demonstrate continuous employment with no gaps greater than 60 days and an aggregate income above 100% of the poverty line in order to renew their legal status after six years. Those who cannot prove continuous work, who cannot find work, or who are fired may fail the test and fall through cracks of immigration reform. Low-income workers, single women with children, and those who work in the informal sector are most vulnerable.

This provision allows employers to have dangerous leverage over immigrant workers seeking to maintain their legal immigrant status, since being fired might mean the difference between staying legal or not. Many immigrants will endure excessively long, hostile, and illegal working conditions to prove continuous employment or meet income requirements. Employers could threaten immigrants with termination or lower wages, and joining unions or self-advocating would be extremely risky. Not to mention the most marginalized will be those least likely to access or afford the legal services necessary to prove their employment requirements.

In the upcoming months and years, we will need to continue fighting for immigration reform that is both realistic, ethical, and that respects the human right to work.

*Melanie Berkovitz is a 2013 Intern Scholar at the Oakland Institute. A 2012 graduate of Brown University, Melanie has worked to improve employment conditions and living wages for workers across the food supply chain. As a paralegal at Joseph & Kirschenbaum LLP, she helped represent restaurant employees in New York City who were victims of wage theft and discrimination.